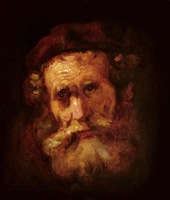 The word rabbi derives from the Hebrew root word רַב, rav, which in biblical Hebrew means ‘great’ in many senses, including "revered". The word comes from the Semitic root R-B-B, and is cognate to Arabic ربّ rabb, meaning "lord" (generally used when talking about God, but also about temporal lords). As a sign of great respect, some great rabbis are simply called "The Rav".

Rabbi is not an occupation found in the Torah (i.e. the Pentateuch) and ancient generations did not employ related titles such as Rabban, Ribbi, or Rab to describe either the Babylonian sages or the sages in Israel. The titles "Rabban" and "Rabbi" are first mentioned in the Mishnah (c. 200 CE). The term was first used for Rabban Gamaliel the elder, Rabban Simeon his son, and Rabban Johanan ben Zakkai, all of whom were patriarchs or presidents of the Sanhedrin. A Greek transliteration of the word is also found in the books of Matthew, Mark and John in the New Testament, where it is used in reference to Jesus.

Sephardic and Yemenite Jews pronounce this word רִבִּי ribbī; the modern Israeli pronunciation רַבִּי rabbī is derived from an 18th century innovation in Ashkenazic prayer books, although this vocalization is also found in some ancient sources. Other variants are rəvī and, in Yiddish, rebbə. The word could be compared to the Syriac word rabi ܪܒܝ.

In ancient Hebrew, rabbi was a proper term of address while speaking to a superior, in the second person, similar to a vocative case. While speaking about a superior, in the third person one could say Ha-Rav ("the Master") or Rabbo ("his Master"). Later, the term evolved into a formal title for members of the Patriarchate. Thus, the title gained an irregular plural form: רַבָּנִים Rabbanim ("rabbis"), and not רַבָּי Rabbai ("my Masters").[1]