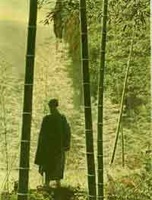 Urdu, Hindi sannyāsī, = Sanskrit saṃnyāsin laying aside, abandoning, ascetic, < saṃ together + ni down + as to throw. Saṃnyāsa in Sanskrit means "renunciation", "abandonment". It is a tripartite compound of saṃ- has "collective" meaning, ni- means "down" and āsa is from the root as, meaning "to throw" or "to put", so a literal translation would be "laying it all down". In Dravidian languages, "sanyasi" is pronounced as "sanyasi" and also "sannasi" in colloquial form.

Sannyasa (Devanagari: सन्यास, sannyāsa) is the order of life of the renouncer within Hindu scheme of āśramas, or life stages. It is considered the topmost and final stage of the ashram systems and is traditionally taken by men at or beyond the age of fifty years old or by young monks who wish to dedicate their entire life towards spiritual pursuits. In this phase of life, the person develops vairāgya, or a state of dispassion and detachment from material life. He renounces all worldly thoughts and desires, and spends the rest of his life in spiritual contemplation. One within the sannyasa order is known as a sannyasin.

There are a number of types of sannyasi in accordance with socio-religious context. Traditionally there are four types of forest hermits with different stages of dedication.[1] In recent history, two distinct orders are observed "ekadanda" (literally single stick) and "tridanda' (triple rod or stick) saffron robed monks,[2] the first being part of Sankaracarya tradition and the second is sannyasa followed by various vaishnava traditions and introduced to the west by followers of the reformer Siddhanta Sarasvati. Austerities and attributes associated with the order, as well as expectations will differ in both.