From Nordan Symposia
(Redirected from Seductive)
Jump to navigationJump to search 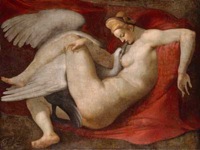 Late Latin seducere, from Latin, to lead away, from se- apart + ducere to lead

In social science, seduction is the process of deliberately enticing a person to engage in some sort of sexual behavior. The word seduction stems from Latin and means literally "to lead astray". As a result, the term may have a positive or negative connotation. Famous seducers from history or legend include Lilith, Giacomo Casanova and the character Don Juan. The seducing agent may even be nonhuman, such as music or food.

Seduction, seen negatively, involves temptation and enticement, often sexual in nature, to lead someone astray into a behavioral choice they would not have made if they were not in a state of sexual arousal. Seen positively, seduction is a synonym for the act of charming someone — male or female — by an appeal to the senses, often with the goal of reducing unfounded fears and leading to their (sexual) emancipation. Some sides in contemporary academic debate, state that the morality of seduction depends on the long-term impacts on the individuals concerned, rather than the act itself, and may not necessarily carry the negative connotations expressed in dictionary definitions.

Seduction is a popular motif in history and fiction, both as a warning of the social consequences of engaging in the behavior or becoming its victim, and as a salute to a powerful skill. In the Bible, Eve offers the forbidden fruit to Adam. Eve is not explicitly depicted as a seductress, but some extra-Biblical commentary and art promote this viewpoint. Eve herself was verbally seduced by the serpent, understood in Christianity to be Satan; the Sirens of Greek myth lured sailors to their death by singing them to shipwreck; Cleopatra beguiled both Julius Caesar and Marc Antony, Dionysus was the Greek God of Seduction and wine, and Persian queen Scheherazade saved herself from execution by story-telling. Famous male seducers, their names synonymous with sexual allure, range from Genji to James Bond.

In biblical times, because unmarried females who lost their virginity had also lost much of their value as marriage prospects, the Old Testament Book of Exodus specifies that the seducer must marry his victim or pay her father to compensate him for his loss of the marriage price: "And if a man entice a maid that is not betrothed, and lie with her, he shall surely endow her to be his wife. If her father utterly refuse to give her unto him, he shall pay money according to the dowry of virgins."[1]

English common law defined the crime of seduction as a felony committed "when a male person induced an unmarried female of previously chaste character to engage in an act of sexual intercourse on a promise of marriage." A father had the right to maintain an action for the seduction of his daughter (or the enticement of a son who left home), since this deprived him of services or earnings.