From Nordan Symposia
(Redirected from Sevenfold)
Jump to navigationJump to search 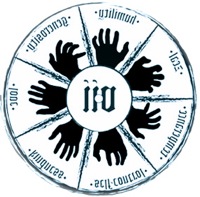 7 (seven) is the natural number following 6 and preceding 8.

Evolution of the Glyph

In the beginning, various Hindus wrote 7 more or less in one stroke as a curve that looks like an uppercase J vertically inverted. The western Ghubar Arabs' main contribution was to make the longer line diagonal rather than straight, though they showed some tendencies to making the character more rectilinear. The eastern Arabs developed the character from a 6-look-alike into an uppercase V-look-alike. Both modern Arab forms influenced the European form, a two-stroke character consisting of a horizontal upper line joined at its right to a line going down to the bottom left corner, a line that is slightly curved in some font variants. As is the case with the European glyph, the Cham and Khmer glyph for 7 also evolved to look like their glyph for 1, though in a different way, so they were also concerned with making their 7 more different. For the Khmer this often involved adding a horizontal line above the glyph. This is analogous to the horizontal stroke through the middle that is sometimes used in handwriting in the Western world but which is almost never used in computer fonts. This horizontal stroke is, however, important to distinguish the glyph for seven from the glyph for one in writings that use a long upstroke in the glyph for one.[1]

The Seven Master Spirits of Paradise are the primary personalities of the Infinite Spirit. In this sevenfold creative act of self-duplication the Infinite Spirit exhausted the associative possibilities mathematically inherent in the factual existence of the three persons of Deity. Had it been possible to produce a larger number of Master Spirits, they would have been created, but there are just seven associative possibilities, and only seven, inherent in three Deities. And this explains why the universe is operated in seven grand divisions, and why the number seven is basically fundamental in its organization and administration.