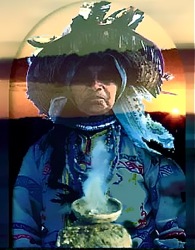 Shamanism is a range of traditional beliefs and practices concerned with communication with the spirit world. A practitioner of shamanism is known as a shaman. There are many variations of shamanism throughout the world; following are beliefs that are shared by all forms of shamanism.

Shaman ˈʃɑːmən/, /ˈʃeɪmən, (|ˈshämən; ˈshā-|) originally referred to the traditional healers of Turkic-Mongol areas such as Northern Asia (Siberia) and Mongolia; šamán being the Turkic word for such a practitioner and meaning "he or she who knows." Other scholars assert that the word comes directly from the Manchu language, and indeed is "the only commonly used English word that is a loan from this language". ISBN 1557865604

In contemporary English language usage, shaman has become interchangeable with the older English language pejorative term witch doctor. This is anthropologically inaccurate, and has raised objections among academics and traditional healers, who assert the word comes from a specific place, people, and set of practices.

Shaman perform a plethora of functions depending upon the society wherein they practise their art: healing;[2] or leading a sacrifice preserving the tradition by storytelling and songs; fortune-telling; acting as a psychopomp (literal meaning, “guide of souls”). In some cultures, a shaman may fulfill several functions in one person.

The necromancer in Greek mythology might be considered a shaman as the necromancer could rally spirits and raise the dead to utilize them as slaves, soldiers and tools for divination.

The functions of a shaman may include either guiding to their proper abode the souls of the dead (which may be guided either one-at-a-time or in a cumulative group, depending on culture), and/or curing (healing) of ailments. The ailments may be either purely physical afflictions -- such as disease, which may be cured by flattering, threatening, or wrestling the disease-spirit (sometimes trying all these, sequentially), and which may be completed by displaying some supposedly extracted token of the disease-spirit (displaying this, even if "fraudulent", is supposed to impress the disease-spirit that it has been, or is in the process of being, defeated, so that it will retreat and stay out of the patient's body) --, or else mental (including psychosomatic) afflictions -- such as persistent terror (on account of some frightening experience), which may be likewise cured by similar methods. Usually in most languages a different term, other than the one translated "shaman", is applied to a religious official ("priest") leading sacrificial rites, or to a reconteur ("sage") of traditional lore; there may be more of an overlap in functions (with that of a shaman), however, in the case of an interpreter of omens or of dreams.[3]