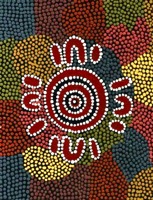 The term animism appears to have been first developed as animismus by the German scientist Georg Ernst Stahl circa 1720, to refer to the "doctrine that animal life is produced by an immaterial soul". The actual English language form of animism however can only be attested to 1819. The term was taken and redefined by the anthropologist Sir Edward Tylor in his 1871 book Primitive Culture, in which he defined it as being "the theory of the universal animation of nature".

Under Tylor's definition therefore, animists viewed the natural world as being innately alive. Being a self-described "confirmed scientific rationalist", he himself however believed that such a view was "childish" and typical of "cognitive underdevelopment", and that it was therefore common in "primitive" peoples such as those living in hunter gatherer societies.

Tylor's definition has largely been followed by anthropologists since, such as Émile Durkheim, Claude Lévi-Strauss and Tim Ingold. However some anthropologists, such as Nurit Bird-Davis have criticised the Tylorian concept of animism, believing it to be outdated.

Animism (from Latin anima "soul, life") is a philosophical, religious or spiritual idea that souls or spirits exist not only in humans but also in animals, plants, rocks, natural phenomena such as thunder, geographic features such as mountains or rivers, or other entities of the natural environment. Animism may further attribute souls to abstract concepts such as words, true names or metaphors in mythology. Animism is particularly widely found in the religions of indigenous peoples, although it is also found in Shinto, and some forms of Hinduism, Sikhism, Pantheism and Neopaganism.

Throughout European history, philosophers such as Plato, Aristotle and Thomas Aquinas, among others, contemplated the possibility that souls exist in animals, plants and people, however the currently accepted definition of animism was only developed in the 19th century by Sir Edward Tylor, who created it as "one of anthropology's earliest concepts, if not the first".

Whilst having similarities to totemism, animism differs in that it, according to the anthropologist Tim Ingold, focuses on individual spirit beings which help to perpetuate life, whilst totemism more typically holds that there is a primary source, such as the land itself, or the ancestors, who provide the basis to life. Certain indigenous religious groups, such as that of the Australian Aborigines are more typically totemic, whilst others, like the Inuit are more typically animistic in their worldview.[1]