From Nordan Symposia
(Redirected from Soldier)
Jump to navigationJump to search 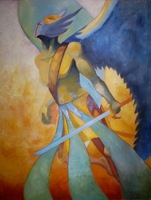 A warrior is a person experienced in or capable of engaging in combat or warfare, especially within the context of a tribal or clan-based society that recognizes a separate warrior class. According to the Random House Dictionary, the term warrior has two meanings. The first literal use refers to "someone engaged or experienced in warfare." The second figurative use refers to "a person who shows or has shown great vigor, courage, or aggressiveness, as in politics or athletics."

In tribal societies engaging in endemic warfare, warriors often form a caste or class of their own. In feudalism, the vassals essentially form a military or warrior class, even if in actual warfare, peasants may be called to fight as well. In some societies, warfare may be so central that the entire people (or, more often, large parts of the male population) may be considered warriors, for example in the Iron Age Germanic tribes or the Medieval Rajput and Sikhs.

Professional warriors are people who are paid money for engaging in military campaigns, and fall into one of two categories: Soldiers, when fighting on behalf of their own state; or mercenaries, when offering their services commercially and unrelated to their own nationality. The classification of somebody who is involved in acts of violence may be a matter of perspective, and there may be disagreement whether a given person is a "legitimate" combatant, or a hooligan, gangster, pirate, terrorist, rebel, brigand or bandit.

A spiritual warrior is a person who bravely battles with the universal enemy, self-ignorance (avidya), the ultimate source of suffering according to dharmic philosophies. The term is applied in religious and metaphysical writing. There are self-described spiritual warriors. The spiritual warrior can be described as an archetype character on a journey for self discovery to benefit others.