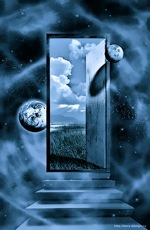 A ring-shaped device that creates a wormhole enabling teleportation to complementary devices located cosmic distances away. It allows practical, rapid travel between two distant locations. Pairs of Stargates function by generating an artificial and stable wormhole between them, allowing one-way travel through.

For lessons on the related topic of Portals, follow this link.

The basic notion of the stargate concept is to have at least two mechanical devices (stargates) in two distant positions, such that, when active, the rings of each become similar to a physical, singular gateway or door-frame between the two locations. The concept was developed by the writers of the feature film Stargate. Similar devices had been seen in previous fiction, but their complete conception as seen in the film was quite original though there has been contention as to whether they plagiarized the idea from a previous script submission.

The idea of a "portal" for travelers has been seen often throughout the history of both fantasy and science fiction, often taking a similar form, a device or magical object shaped as a regular or irregular closed geometric form filled with a water-like, rippling puddle that represents the boundary point between the two locations. The stargate picks up heavily on this conception, emphasizing the "watery puddle" for the sake of an alien mystique.

Much of the inspiration for the functioning of the device is drawn heavily from astrophysics, particularly that of black holes and wormholes, a staple of science fiction, often used to create "shortcuts" through space. Although these may exist in reality, it is not widely held to be true that any such phenomenon could safely transport a human being,[1] As such wormholes would most likely be created by excessive gravity (e.g. from a black hole) which would destroy any potential traveler. [2] In Stargate however, this is circumverted by transporting a traveller through as an energy signature, and reintegrating him at the other end.