From Nordan Symposia
(Redirected from Teenager)
Jump to navigationJump to search 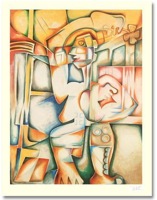 For lessons on the topic of Adolescence, follow this link.

Adolescence (from Latin: adolescere meaning "to grow up") is a transitional stage of physical and mental human development generally occurring between puberty and legal adulthood (age of majority), but largely characterized as beginning and ending with the teenage stage. According to Erik Erikson's stages of human development, for example, a young adult is generally a person between the ages of 20 and 40, whereas an adolescent is a person between the ages of 13 and 19. Historically, puberty has been heavily associated with teenagers and the onset of adolescent development. However, the start of puberty has had somewhat of an increase in preadolescence (particularly females, as seen with early and precocious puberty), and adolescence has had an occasional extension beyond the teenage years (typically males) compared to previous generations. These changes have made it more difficult to rigidly define the time frame in which adolescence occurs.

The end of adolescence and the beginning of adulthood varies by country and by function, and furthermore even within a single nation-state or culture there can be different ages at which an individual is considered to be (chronologically and legally) mature enough to be entrusted by society with certain tasks. Such milestones include, but are not limited to, driving a vehicle, having legal sexual relations, serving in the armed forces or on a jury, purchasing and drinking alcohol, voting, entering into contracts, completing certain levels of education, and marrying.

Adolescence is usually accompanied by an increased independence allowed by the parents or legal guardians and less supervision, contrary to the preadolescence stage.[1]