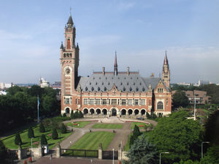 The International Court of Justice also called the Peace Palace

The Hague with capital T', (also', "The Count's Hedge") is the third-largest city in the Netherlands]] after Amsterdam and Rotterdam. It is located in the west of the country, in the province of South Holland, of which it is also the provincial capital. The Hague is, like Amsterdam, Rotterdam and Utrecht, part of the conglomerate metropolitan area Randstad, with a population of 6,659,300 inhabitants.

The Hague is the actual seat of government, but, somewhat anomalously, not the official capital of the Netherlands, a role set aside by the Dutch constitution]for Amsterdam. The Hague is the home of the Eerste Kamer (first chamber) and the [Tweede Kamer (second chamber), respectively the upper and lower houses forming the Staten Generaal (literally the "Estates-General"). Queen Beatrix]] of the Netherlands lives and works in The Hague. All foreign embassies and government ministriesare located in the city, as well as the Hoge Raad der Nederlanden' (The Supreme Court), the Raad van State (Council of State) and many lobbying organisations.

The Hague was founded in 1248 by William II, Count of Holland and King of the Romans or Rex Romanorum, who was supposed to become Holy Roman Emperor. He started the construction of a castle in a forest near the sea in Holland, where he intended to live after his coronation. He died in battle before he could be crowned. His castle was not finished, but parts of it remain and are now called the Ridderzaal (Knights' Hall). It is still in use for political events, such as the annual speech from the throne by the monarch.

Later, the counts of Holland used The Hague as their administrative centre. 'Des Graven Hage' literally means "the count's hedge" or "the count's private enclosure". The powerful cities of Holland, like Leiden, Delft, and Dordrecht, struck a compromise to choose the then small and unimportant village of The Hague as their administrative centre. This policy was never changed, and The Hague is to this day the center of government but not the official capital.

To keep The Hague small, it was not allowed city rights or allowed to build city walls. When city walls were finally allowed in the 1500s, the population decided to use the money to build a city hall instead of city walls. This proved disastrous during the Eighty Years' War, as it allowed Spanish troops to easily occupy the town.

The Hague was finally named a city by the French occupation force in 1806, centuries after other Dutch cities had received similar rights. All this has led to the urban legend that The Hague is not a city but a village.

Because of its history, it lacks a large historical inner city like the nearby cities of Leiden and Delft. But when the government started playing a more prominent role in Dutch society after 1850, The Hague quickly expanded. The older parts of the city are therefore mostly from the 19th century and the early 20 th century. The growing city annexed the municipality of Loosduinen partly in 1903 and completely in 1923.

Parts of the city sustained heavy damage during World War II. The Atlantic Wall was built through part of the city, causing whole neighrhoods to be torn down by the German occupiers. On [[March 3 ,1945, the Royal Air Force mistakenly bombed the Bezuidenhout district. The target was an installation of V-2 rockets in a nearby park. Due to navigational errors, the bombs fell on a heavily populated and historic part of the city. Over 500 people died and the scars in the city can still be seen today.

After the war The Hague was at one point the largest building site in Europe. The city expanded massively to the southwest. The destroyed areas were also quickly rebuilt. The population peaked at 600,000 inhabitants around 1965.

In the 1970s and 1980s the mostly white middle classes moved to neighboring towns like Voorburg, Leidschendam, Rijswijk and most of all Zoetermeer. This led to the traditional pattern of an impoverished inner city and more prosperous suburbs. Attempts to include parts of the suburbs in The Hague were highly controversial. In the 1990s, with the consent of the Dutch Parliament, The Hague did succeed in annexing fairly large areas from its neighboring towns on which complete new residential areas were built and are still being built.

The stork is the symbol of Den Haag.

The city has a limited student culture because it has no real university, although there is a vocational university called the The Hague University. The city has many civil servants and diplomats. In fact, the number and variety of foreign residents (especially the expatriates) makes the city culturally quite diverse, with many foreign pubs, shops and cultural events.

The Hague is the largest Dutch city on the North Sea and comprises two distinct beach towns. The main beach resort Scheveningen, in the northwestern part of the city, is a popular destination for tourists and young people. With 10 million visitors a year it is the most popular beach town in the Benelux. It's perhaps for this reason that many, even some Dutch people, mistakenly believe Scheveningen is a city in its own right. That is not the case: Scheveningen is one of The Hague's eight districts ("stadsdelen"). Kijkduin, in the southwest, is The Hague's other beach resort. It is a lot smaller and attracts mainly local people.

The former Dutch colony of Netherlands East Indies ("Nederlands-Indië", current-day Indonesia) has left its mark on The Hague. Many streets are named after places in the Netherlands East Indies and there is a sizable "Indisch(e)" or "Indo" (i.e. mixed Dutch-Indonesian) community. Since the loss of these Dutch possessions in December 1949, "Indisch(e)" or "Indo" people often refer to The Hague as "the Widow of the Indies".

The older parts of the town usually have characteristically wide and long streets. Houses are generally low-rise (not more than three floors), and quite elegant. The layout of the city is more spacious than other Dutch cities. There are only a few canals in The Hague, as most of them were drained in the late 1800s.

Some of the most prosperous and some of the poorest neighbourhoods of the Netherlands can be found in The Hague. The wealthier areas (The Vogelwijk, Statenkwartier, Belgisch Park and Benoordenhout) are generally located in the northwest part of the city. The poorer areas (Transvaal, Moerwijk, the Schilderswijk) can be found in the southern and eastern areas. This division is reflected in the local accent: The more affluent citizens are usually called "Hagenaars" and speak so-called "bekakt Haags" ("Bekakt" is Dutch for "stuck-up"). This contrasts with the "Hagenezen", who speak "plat Haags" ("plat" meaning "flat" or "common"). There is relatively little social interaction between these groups.

The tallest building is the Hoftoren.

The foundation of The Hague as an "international city of peace and justice" was laid in 1899, when the world's first Peace Conference]] took place in The Hague on Tobias Asser's initiative, followed by a second in 1907. A direct result of these meetings was the establishment of the world's first organisation for the settlement of international disputes: the Permanent Court of Arbitration (PCA). Shortly thereafter the Scottish-American millionaire Andrew Carnegie made the necessary funds available to build the Peace Palace (“Vredespaleis”) to house the PCA.

Currently the city authority is seeking to establish an image of the city as the "legal capital of the world" and "international city of peace and justice".