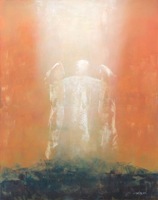 b : an exalting, glorifying, or spiritual change

Transfiguration refers to the assumption by spiritual masters, or its perception by their followers, of momentary divine radiance.

In the ladder of Jacob, at the conclusion of this instruction, instead of simply being given the new name Israel, Jacob is introduced to his heavenly counterpart, the angel Israel.

In the Book of Enoch, when Enoch returns to Earth, he tells his children that although they see him as the earthly, human Enoch, there is likewise an angelic Enoch (Metatron) that has stood in the Lord’s Presence.

Lumen Gentium states that the Immaculate Virgin [...] was exalted by the Lord as Queen of the universe, that she might be the more fully confimed to her Son, the Lord of lords and the conqueror of sin and death.

In Christian eschatology, eternal life is said to be the transfiguration of all of humanity.

P.D. Ouspensky recounts an episode where he claims that he and other onlookers experienced a change in the aspect of Gurdjieff while seated in a railway carriage.