From Nordan Symposia
(Redirected from Ugly)
Jump to navigationJump to search 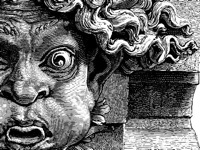 b : a piece of work in this style

The word grotesque comes from the same Latin root as "Grotto", meaning a small cave or hollow. The original meaning was restricted to an extravagant style of Ancient Roman decorative art rediscovered and then copied in Rome in the 15th century. The "caves" were in fact rooms and corridors of the Domus Aurea, the unfinished palace complex started by Nero after the great fire from AD 64, which had become overgrown and buried, until they were broken into again, mostly from above.

In modern English, grotesque has come to be used as a general adjective for the strange, fantastic, ugly, incongruous, unpleasant, or bizarre, and thus is often used to describe weird shapes and distorted forms such as Halloween masks. More specifically, the grotesque forms on Gothic buildings, when not used as drain-spouts, should not be called gargoyles, but rather referred to simply as grotesques, or chimeras.[1]