From Nordan Symposia
(Redirected from Vegetable)
Jump to navigationJump to search 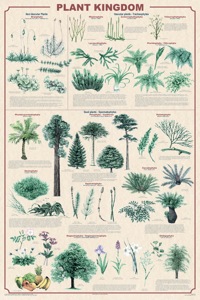 1 a : a young tree, vine, shrub, or herb planted or suitable for planting

2 a : the land, buildings, machinery, apparatus, and fixtures employed in carrying on a trade or an industrial business

b : a factory or workshop for the manufacture of a particular product; also : power plant
c : the total facilities available for production or service
d : the buildings and other physical equipment of an institution

3 : an act of planting 4 : something or someone planted

Plants are living organisms belonging to the kingdom Plantae. They include familiar organisms such as trees, herbs, bushes, grasses, vines, ferns, mosses, and green algae. The scientific study of plants, known as botany, has identified about 350,000 extant species of plants, defined as seed plants, bryophytes, ferns and fern allies. As of 2004, some 287,655 species had been identified, of which 258,650 are flowering and 18,000 bryophytes (see table below). Green plants, sometimes called Viridiplantae, obtain most of their energy from sunlight via a process called photosynthesis.

Aristotle divided all living things between plants (which generally do not move), and animals (which often are mobile to catch their food). In Linnaeus' system, these became the Kingdoms Vegetabilia (later Metaphyta or Plantae) and Animalia (also called Metazoa). Since then, it has become clear that the Plantae as originally defined included several unrelated groups, and the fungi and several groups of algae were removed to new kingdoms. However, these are still often considered plants in many contexts, both technical and popular.

The photosynthesis conducted by land plants and algae is the ultimate source of energy and organic material in nearly all ecosystems. Photosynthesis radically changed the composition of the early Earth's atmosphere, which as a result is now 21% oxygen. Animals and most other organisms are aerobic, relying on oxygen; those that do not are confined to relatively rare anaerobic environments. Plants are the primary producers in most terrestrial ecosystems and form the basis of the food web in those ecosystems. Many animals rely on plants for shelter as well as oxygen and food.

Land plants are key components of the water cycle and several other biogeochemical cycles. Some plants have co-evolved with nitrogen fixing bacteria, making plants an important part of the nitrogen cycle. Plant roots play an essential role in soil development and prevention of soil erosion.

Plants are distributed worldwide in varying numbers. While they inhabit a multitude of biomes and ecoregions, few can be found beyond the tundras at the northernmost regions of continental shelves. At the southern extremes, plants have adapted tenaciously to the prevailing conditions. (See Antarctic flora.)

Plants are often the dominant physical and structural component of habitats where they occur. Many of the Earth's biomes are named for the type of vegetation because plants are the dominant organisms in those biomes, such as grasslands and forests.[1]