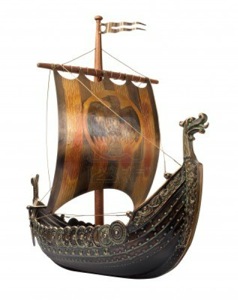 The Old Norse feminine noun víking refers to an expedition overseas. It occurs in Viking Age runic inscriptions and in later medieval writings in set expressions such as the phrasal verb fara í víking "to go on an expedition". In later texts such as the Icelandic sagas, the phrase "to go on a viking" implies participation in raiding activity or piracy, and not simply seaborne missions of trade and commerce. The derived Old Norse masculine noun víkingr appears in Viking Age skaldic poetry and on several rune stones found in Scandinavia, where it refers to a seaman or warrior who takes part in an expedition overseas. The word víking derives from the feminine vík, meaning "creek, inlet, small bay".

The form also occurs as a personal name on some Swedish rune stones. There is little indication of any negative connotation in the term before the end of the Viking Age. Regardless of its possible origins, the word was used to indicate an activity and those who participated in it, and it did not belong to any ethnic or cultural group.

In Old English, the word wicing appears first in the Anglo-Saxon poem, Widsith, which probably dates from the 9th century. In Old English, and in the history of the archbishops of Hamburg-Bremen written by Adam of Bremen in about 1070, the term is synonymous with pirate and a Scandinavian. As in the Old Norse usages, the term is not employed as a name for any people or culture in general. The word does not occur in any preserved Middle English texts.

The word Viking was introduced into Modern English during the 18th-century Viking revival, at which point it acquired romanticised heroic overtones of "barbarian warrior" or noble savage. During the 20th century, the meaning of the term was expanded to refer not only to seaborne raiders from Scandinavia, but secondarily to any Scandinavian who lived during the period from the late 8th to the mid-11th centuries, or more loosely from about 700 to as late as about 1100. As an adjective, the word is used to refer to ideas, phenomena or artefacts connected with Scandinavians and their cultural life in these centuries, producing expressions like Viking age, Viking culture, Viking art, Viking religion, Viking ship, and so on. The people of medieval Scandinavia are also referred to as Norse, although this term properly applies only to the Old-Norse-speaking peoples of Scandinavia, and not to the Sami.

The word Viking appears to be older than the Viking Age. It occurs in Exodus, the Alexandrian translation of the 2nd Leviticus, which mentions the Jewish exodus from Egypt. On the voyage across the Read Sea, they are termed; säwicingas. In the Alexandrian Widsith occurs the word Viking in line 47; wicinga cynn, clan, and in line 59 and 80, the Vikings used the same term for themselves. The word Viking denotes mobility, those who deal with travel; Vikja, vik, veik, vikjinn is the old west-Norwegian verb with the same meaning as the word viking. Adam of Bremen tells us that these pirates, in Greek words that are related to go (travel), call themselves Vikings, while our countrymen call them ascomanner, i.e. boaters. The term scegdman is Anglo-Saxon and it also means boaters, and there are several other terms with similar meanings (Askeberg 1944 s.153).[7] The Vikings are associated with robbery and assault, and they got a good deal of written description because of this. The newly established Christian church was subjected to the Vikings’ robbery, but the reasoning for excursions was the necessary expansion, which was natural for their swidden culture in a time of climate deterioration.

b not capitalized : sea rover

The Vikings (from Old Norse víkingr) were seafaring north Germanic people who raided, traded, explored, and settled in wide areas of Europe, Asia, and the North Atlantic islands from the late 8th to the mid-11th centuries. The Vikings employed wooden longships with wide, shallow-draft hulls, allowing navigation in rough seas or in shallow river waters. The ships could be landed on beaches, and their light weight enabled them to be hauled over portages. These versatile ships allowed the Vikings to travel as far east as Constantinople and the Volga River in Russia, as far west as Iceland, Greenland, and Newfoundland, and as far south as Nekor. This period of Viking expansion, known as the Viking Age, constitutes an important element of the medieval history of Scandinavia, Great Britain, Ireland, Russia, and the rest of Europe.

Popular conceptions of the Vikings often differ from the complex picture that emerges from archaeology and written sources. A romanticised picture of Vikings as noble savages began to take root in the 18th century, and this developed and became widely propagated during the 19th-century Viking revival. The received views of the Vikings as violent brutes or intrepid adventurers owe much to the modern Viking myth that had taken shape by the early 20th century. Current popular representations are typically highly clichéd, presenting the Vikings as familiar caricatures.