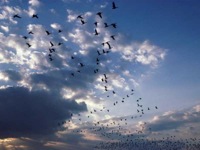 b (1) : growing or produced without human aid or care <wild honey> (2) : related to or resembling a corresponding cultivated or domesticated organism

b : not amenable to human habitation or cultivation; also : desolate

b : having no basis in known or surmised fact <a wild guess>

Wildness is literally the quality of being wild or untamed, but further to this, it has been defined as a quality produced in nature (Thoreau 1906), as that which emerges from a forest (Micoud 1993), and as a level of achievement in nature (Cookson 2004). It differs from wilderness, which is a place where wildness occurs.

Wildness is often mentioned in the writings of naturalists, such as John Muir and David Brower, where it is admired for its freshness and otherness. Henry David Thoreau wrote the famous phrase, “In wildness is the preservation of the world.” Some artists and photographers such as Eliot Porter explore wildness in the themes of their works. The benefits of reconnecting with nature by seeing the achievements of wildness is an area being investigated by ecopsychology.

Attempts to identify the characteristics of wildness are varied. One consideration sees wildness as that part of nature which is not controllable by humans. Nature retains a measure of autonomy, or wildness, apart from human constructions. Another version of this theme is that wildness produces things that are natural, while humans produce things that are artificial (man-made). Ambiguities about the distinction between the natural and the artificial animate much of art, literature and philosophy. There is the perception that naturally produced items have a greater elegance over artificial things. Modern zoos seek to improve the health and vigour of animals by simulating natural settings, in a move away from stark man-made structures.

Another view of wildness is that it is a social construct, and that humans cannot be considered innately ‘unnatural’. As wildness is claimed to be a quality that builds from animals and ecosystems, it often fails to be considered within reductionist theories for nature.

Meanwhile, an ecological perspective sees wildness as "(the degree of) subjection to natural selection pressures", many of which emerge independently from the biosphere. Thus modern civilization - contrasted with all humanity - can be seen as an 'unnatural' force (lacking wildness) as it strongly insulates its population from many natural selection mechanisms, including interspecific competition such as predation and disease, as well as some intraspecific phenomena.[1]