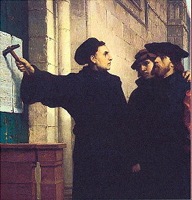 Doctrine (Latin: doctrina) is a codification of beliefs or "a body of teachings" or "instructions", taught principles or positions, as the body of teachings in a branch of knowledge or belief system.

The Greek analogy is the etymology of catechism.

Often doctrine specifically connotes a corpus of religious dogma as it is promulgated by a church, but not necessarily: doctrine is also used to refer to a principle of law, in the common law traditions, established through a history of past decisions, such as the doctrine of self-defense, or the principle of fair use, or the more narrowly applicable first-sale doctrine. In some organizations, doctrine is simply defined as 'that which is taught', in other words the basis for institutional teaching of its personnel internal ways of doing business.

b. esp. That which is taught or laid down as true concerning a particular subject or department of knowledge, as religion, politics, science, etc.; a belief, theoretical opinion; a dogma, tenet.
c. Monroe doctrine (U.S. politics): the name applied (since about 1848) to a principle or series of principles of policy put forward in, or deduced from, the Message of President Monroe to Congress, 2 Dec. 1823.

In this it was declared that ‘we should consider any attempt’ on the part of the Allied European Powers ‘to extend their system to any portion of this hemisphere as dangerous to our peace and safety’; that ‘any interposition, for the purpose of oppressing’ the recently revolted Spanish-American colonies, ‘or controlling in any other manner their destiny, by any European Power’ would be viewed ‘as the manifestation of an unfriendly disposition towards the United States’; and that ‘the American continents should no longer be subjects for any new European colonial settlement’.

The term indoctrination came to have awkward connotations during the 20th century, but it is necessary to retain it, in order to distinguish it from education. In genuine education one is asked to stand as much as possible outside the body of accumulated knowledge and analyze it oneself. In indoctrination on the other hand, one stands within the body of knowledge and absorbs its teachings without critical thought.