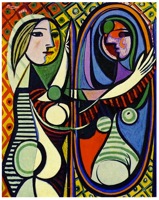 b : the process or technique of reproducing a spatial object upon a plane or curved surface or a line by projecting its points; also : a graph or figure so formed

b : a view of a building or architectural element

b : the attribution of one's own ideas, feelings, or attitudes to other people or to objects; especially : the externalization of blame, guilt, or responsibility as a defense against anxiety

b : control of the volume, clarity, and distinctness of a voice to gain greater audibility

For lessons on the topic of Projection, follow this link.

Psychological projection was conceptualized by Sigmund Freud in the 1890s as a defense mechanism in which a person unconsciously rejects his or her own unacceptable attributes by ascribing them to objects or persons in the outside world.

Although rooted in early developmental stages, and classed by Vaillant as an immature defence, the projection of one's negative qualities onto others on a small scale is nevertheless a common process in everyday life.

Projection was conceptualised by Freud in his letters to Wilhelm Fliess, and further refined by Karl Abraham and Anna Freud. Freud considered that in projection thoughts, motivations, desires, and feelings that cannot be accepted as one's own are dealt with by being placed in the outside world and attributed to someone else. What the ego repudiates is split off and placed in another.

Freud would later come to believe that projection did not take place at random, but rather seized on and exaggerated an element that already existed on a small scale in the other person. (The related defence of projective identification differs from projection in that there the other person is expected to become identified with the impulse or desire projected outside, so that the self maintains a connection with what is projected, in contrast to the total repudiation of projection proper.

Melanie Klein saw the projection of good parts of the self as leading potentially to over-idealisation of the object. Equally, it may be one's conscience that is projected, in an attempt to escape its control: a more benign version of this allows one to come to terms with outside authority.

Later studies were critical of Freud's theory. Research supports the existence of a false consensus effect whereby humans have a broad tendency to believe that others are similar to themselves, and thus "project" their personal traits onto others. This applies to good traits as well as bad traits and is not a defence mechanism for denying the existence of the trait within the self.

Instead, Newman, Duff, and Baumeister (1997) proposed a new model of defensive projection. In this view, people try to suppress thoughts of their undesirable traits, and these efforts make those trait categories highly accessible — so that they are then used all the more often when forming impressions of others. The projection is then only a by-product of the real defensive mechanism.[1]