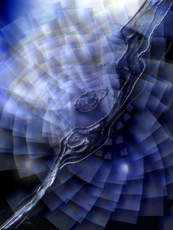 Trance denotes a variety of processes, techniques, modalities and states of mind, awareness and consciousness. Trance states may occur involuntarily and unbidden.

The term "trance" may be associated with meditation, magic, and prayer. It may also be related to the earlier generic term, "altered states of consciousness", which is no longer preferred in Consciousness Studies discourse.

Trance is from Latin 'transīre': to cross, pass over and the multiple meaning of the polyvalent homonym "entrance" as a verb and noun provide insight into the nature of trance as a threshold, conduit, Portal and/or channel.

An intransitive usage of the verb 'trance' now obsolete is 'to pass', 'to travel'.

Palsgrave has ‘Traunce a sickenesse, trance’, and Cotgr. has ‘also, a traunce or sowne; a great astonishment, amazement, or appallment’, but these senses do not appear in Littré or Godef.; perh. they were Anglo-Fr.; otherwise the chief mod. sense of the Eng. word does not appear in F.]

b. A state of mental abstraction from external things; absorption, exaltation, rapture, ecstasy.

1. While they may have practiced deception in minor matters, the great majority of the shamans believed in the fact of their spirit possession. Women who were able to throw themselves into a trance or a cataleptic fit became powerful shamanesses; later, such women became prophets and spirit mediums. Their cataleptic trances usually involved alleged communications with the ghosts of the dead. Many female shamans were also professional dancers. (90:1.3)

2. There is great danger associated with the habitual practice of religious daydreaming; mysticism may become a technique of reality avoidance, albeit it has sometimes been a means of genuine spiritual communion. Short seasons of retreat from the busy scenes of life may not be seriously dangerous, but prolonged isolation of personality is most undesirable. Under no circumstances should the trancelike state of visionary consciousness be cultivated as a religious experience. (100:5.8)