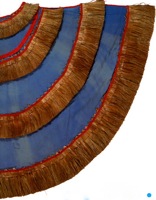 b. spec. The action or process of making a shortened version or abstract of a longer text; statement in abridged form; an instance of this.

b. fig. Chiefly with of. A person who or thing which epitomizes or embodies something, a compendium; a representation in miniature; the essence or distillation of something. Now rare.1605
c. A shortened form of a word or phrase; an abbreviation.

Abridgement or abridgment is a term defined as "shortening" or "condensing" and is most commonly used in reference to the act of reducing a written work, typically a book, into a shorter form. The abridgement can be true to the original work in terms of mood and tone, capturing the parts the abridging author perceives to be most important, or it could be a complete parody of the original.

A written work may be abridged to make it more accessible to a wider audience; for example, to make an adaptation of it as an audio book or a television show, to make a more convenient companion to an already established work, or to create a shorter reference version.[1]