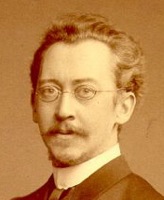 Adolf von Harnack (May 7, 1851 - June 10, 1930), was a German theologian and prominent church historian. He produced many religious publications from 1873-1912. Harnack traced the influence of Hellenistic philosophy on early Christian writing and called on Christians to question the authenticity of doctrines that arose in the early Christian church. He rejected the gospel of John in favor of the synoptic gospels, criticized the Apostles' Creed, and promoted the social gospel.

In the 19th century, higher criticism flourished in Germany, establishing the historical-critical method as an academic standard for interpreting the Bible and understanding the historical Jesus (see Tübingen school). Harnack's iconoclastic work is part of this tradition.

He was born at Dorpat (today Tartu) in Livonia (then a province of Russia, now in Estonia) where his father, Theodosius Harnack, held a professorship of pastoral theology.

Harnack studied at the local University of Tartu (1869 - 1872) and at the University of Leipzig, where he took his degree; and soon afterwards (1874) began lecturing as a Privatdozent. These lectures, which dealt with such special subjects as Gnosticism and the Apocalypse, attracted considerable attention, and in 1876 he was appointed professor extraordinarius. In the same year he began the publication, in conjunction with Oscar Leopold von Gebhardt and Theodor Zahn, of an edition of the works of the Apostolic Fathers, Patrum apostolicorum opera, a smaller edition of which appeared in 1877.

He married Amalie Thiersch on December 27, 1879. Earlier that year, he was called to the University of Giessen as professor ordinarius of church history. There he collaborated with Gebhardt in Texte und Untersuchungen zur Geschichte der altchristlichen Litteratur (1882 sqq.), an irregular periodical, containing only essays in New Testament and patristic fields. In 1881 he published a work on monasticism, Das Mönchtum - seine Ideale und seine Geschichte (5th ed., 1900; English translation, 1901), and became joint editor with Emil Schürer of the Theologische Literaturzeitung.

In 1885 he published the first volume of his Lehrbuch der Dogmengeschichte (3rd ed. in three volumes, 1894–1898; English translation in seven volumes, 1894 - 1899). In this work Harnack traced the rise of dogma, which he understood as the authoritative doctrinal system of the church and its development from the 4th century down to the Protestant Reformation. He considered that from its earliest origins, Christian faith and Greek philosophy were so closely intermingled that the resultant system included many beliefs and practices that were not authentically Christian. Therefore Protestants are not only free, but bound, to criticize it; Protestantism could be understood as a rejection of this dogma and a return to the pure faith that characterized the original church. An abridgment of this appeared in 1889 with the title Grundriss der Dogmengeschichte (3rd ed., 1898).

In 1886 Harnack was called to the University of Marburg and in 1888, in spite of violent opposition from the conservative church authorities, to Berlin. In 1890 he became a member of the Academy of Sciences. In Berlin, somewhat against his will, he was drawn into a controversy on the Apostles' Creed, in which the partisan antagonisms within the Prussian Church had found expression. Harnack's view was that the creed contains both too much and too little to be a satisfactory test for candidates for ordination; he preferred a briefer declaration of faith which could be rigorously applied to all (cf. his Das Apostolische Glaubensbekenntnis. Ein geschichtlicher Bericht nebst einer Einleitung und einem Nachwort, 1892).

In Berlin, Harnack continued writing. In 1893 he published a history of early Christian literature down to Eusebius of Caesarea, Geschichte der altkirchlichen Literatur bis Eusebius (part 2 of vol. 5., 1897); and in his popular lectures, Das Wesen des Christentums appeared in 1900 (5th ed., 1901; English translation, What is Christianity? 1901). One of his later historical works, Die Mission und Ausbreitung des Christentums in den ersten drei Jahrhunderten (1902; English translation, The Mission and Expansion of Christianity in the First Three Centuries, in two volumes, 1904-1905), was followed by some important New Testament studies (Beitrage zur Einleitung in das neue Testament, 1906 sqq.; Engl. trans.: Luke the Physician, 1907; The Sayings of Jesus, 1908).

Harnack was one of the most prolific and stimulating of modern critical scholars, and brought up in his "Seminar" a whole generation of teachers who carried his ideas and methods throughout the whole of Germany and beyond.

Like many ostensibly liberal professors in Germany, Harnack welcomed World War I in 1914, and signed a public statement endorsing Germany's war-aims. It was this statement, with his teacher Harnack's signature on it, that Karl Barth cited as a major impetus for his rejection of liberal theology.

Harnack was one of the moving spirits in the foundation, in 1911, of the Kaiser Wilhelm Gesellschaft (KWG), and became its first President. The Society's activities were much constrained by the First World War, but in the Weimar Republic period Harnack guided it to be a major vehicle for overcoming the isolation of German academics felt as a result of the war and its aftermath. The society's flagship conference centre in Berlin, the Harnack House, which opened in 1929, was named in his honour. After a long period in U.S. Army hands after World War II it has now resumed the role Harnack envisaged, as a centre for international intellectual life in the German capital, under the management of the KWG's successor organisation, the Max Planck Gesellschaft.

Among the distinctive characteristics of Harnack's work were his insistence on absolute freedom in the study of church history and the New Testament (i.e. there were no "taboo" areas of research that could not be critically examined); his distrust of speculative theology, whether orthodox or liberal; and his interest in practical Christianity as a religious life and not a system of theology. Some of his addresses on social matters were published under the heading "Essays on the Social Gospel" (1907).

Though the four gospels have been regarded as canonical since Irenaeus in the 2nd century, Harnack - like earlier German scholars - rejected the Gospel of John as without historical value regarding Jesus' life:

"In particular, the fourth Gospel, which does not emanate or profess to emanate from the apostle John, cannot be taken as an historical authority in the ordinary meaning of the word. The author of it acted with sovereign freedom, transposed events and put them in a strange light, drew up the discourses himself, and illustrated great thoughts by imaginary situations. Although, therefore, his work is not altogether devoid of a real, if scarcely recognisable, traditional element, it can hardly make any claim to be considered an authority for Jesus’ history; only little of what he says can be accepted, and that little with caution. On the other hand, it is an authority of the first rank for answering the question, What vivid views of Jesus’ person, what kind of light and warmth, did the Gospel disengage?"[1] Note that the word "disengage" here is a mistranslation of the word entbunden which appears in the original German text, which would be better rendered "give birth to", "set in motion" or "release"

Harnack denied the possibility of miracles but argued that Jesus may well have performed acts of healing that seemed miraculous: "That the earth in its course stood still; that a she-ass spoke; that a storm was quieted by a word, we do not believe, and we shall never again believe; but that the lame walked, the blind saw, and the deaf heard will not be so summarily dismissed as an illusion."