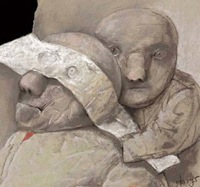 Anti-intellectualism is hostility towards and mistrust of intellect, intellectuals, and intellectual pursuits, usually expressed as the derision of education, philosophy, literature, art, and science, as impractical and contemptible. Alternatively, self-described intellectuals who are alleged to fail to adhere to rigorous standards of scholarship may be described as anti-intellectuals.

In public discourse, anti-intellectuals usually perceive and publicly present themselves as champions of the common folk — populists against political elitism and academic elitism — proposing that the educated are a social class detached from the everyday concerns of the majority, and that they dominate political discourse and higher education.

Anti-intellectualism perhaps saw its most extreme form during the 1970s in Cambodia under the rule of Pol Pot and the Khmer Rouge, when people were killed for being academics or even for wearing eyeglasses in the Killing Fields.

Anti-intellectualism usually is expressed through declarations of otherness — the intellectual is “not one of us” and may be dangerous, due to having little empathy for the common folk. Historically, this resulted in portrayals of intellectuals as an arrogant class, whom rural communities viewed as “city slickers” indifferent to country ways; such communities tended to stereotype intellectuals as foreigners or as racial and ethnic minorities who “think differently” than the natives. Religious critics describe intellectuals as prone to mental instability, proposing an organic, causal connection between genius and madness; they are unlike regular people because of their assumed atheism, and are indecent given their sexual mores, homosexuality, sexual promiscuity, or celibacy.

Economist Thomas Sowell argues for distinctions between unreasonable and reasonable wariness of intellectuals. Defining intellectuals as "people whose occupations deal primarily with ideas" as distinct from those who apply ideas practically, Sowell argues that there can be good cause for distrust of intellectuals. When working in their fields of expertise, intellectuals have increased knowledge. However, when compared to other careers, Sowell suggests intellectuals have few disincentives for speaking outside their expertise, and are less likely to face the consequences of their errors. For example, a physician is judged by effective treatment, yet might face malpractice lawsuits if he harms a patient. In contrast, a university professor with tenure is less likely to be judged by the effectiveness of his ideas and less likely to face repercussions for his errors:

By encouraging, or even requiring, students to take stands where they have neither the knowledge nor the intellectual training to seriously examine [complex] issues, teachers promote the expression of unsubstantiated opinions, the venting of uninformed emotions, and the habit of acting on those opinions and emotions, while ignoring or dismissing opposing views, without having either the intellectual equipment or the personal experience to weigh one view against another in any serious way.

Similar arguments have been made by others. Historian Paul Johnson argued that a close examination of 20th century history reveals that intellectuals have championed innumerable disastrous public policies, writing, "beware intellectuals. Not merely should they be kept well away from the levers of power, they should also be objects of suspicion when they seek to offer collective advice." Journalist Tom Wolfe described an intellectual as "a person knowledgable in one field who speaks out only in others."[1]