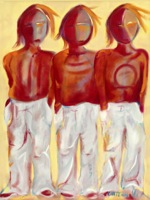 Greek apatheia, from apathēs without feeling, from a- + pathos emotion — more at pathos

The word "apathy" derives from the Greek ἀπάθεια (apatheia).[2] Also meaning "absence of passion", "apathy" or "insensibility" in Greek, the term apatheia was used by the Stoics to signify a (desirable) state of indifference towards events and things which lie outside one's control (that is, according to their philosophy, all things exterior, one being only responsible of his representations and judgments). Another way of characterizing the way that the Stoics saw apathy is as "the extinction of the passions (negative feelings) by the ascendency of reason".[3]

Apathy (also called impassivity or perfunctoriness) is a state of indifference, or the suppression of emotions such as concern, excitement, motivation and passion. An apathetic individual has an absence of interest or concern to emotional, social, or physical life. They may also exhibit an insensibility or sluggishness.

Often, apathy has been felt after witnessing horrific acts, such as the killing or maiming of people during a war. It is also known to be associated with many conditions including depression. Some medications and the heavy use of drugs such as heroin may bring apathy as a side effect.

The modern concept of apathy became more well-known after World War I, when it was called "shell shock". Soldiers who lived in the trenches amidst the bombing and machine gun fire, and who saw the battlefields strewn with dead and maimed comrades developed a sense of disconnected numbness and indifference to normal social interaction.

In 1950, US novelist John Dos Passos wrote that "Apathy is one of the characteristic responses of any living organism when it is subjected to stimuli too intense or too complicated to cope with. The cure for apathy is comprehension." US educational philosopher Robert Maynard Hutchins summarized the concerns about political indifference when he claimed that the "death of democracy is not likely to be an assassination from ambush. It will be a slow extinction from apathy, indifference, and undernourishment."

John McManamy argues that although psychiatrists do not explicitly deal with the condition of apathy, it is a psychological problem for some depressed people, in which they get a sense that "nothing matters", the "lack of will to go on and the inability to care about the consequences".[4] He describes depressed people who "...cannot seem to make [themselves] do anything", who "can't complete anything", and who do not "feel any excitement about seeing loved ones".[4] He acknowledges that the Diagnostic and Statistical Manual of Mental Disorders does not discuss apathy. In a Journal of Neuropsychiatry and Clinical Neurosciences article from 1991, Dr Robert Marin MD claimed that apathy occurs due to brain damage or neuropsychiatric illnesses such as Alzheimer’s, dementia, Parkinson's, or Huntington’s, or else an event such as a stroke. Marin argues that apathy should be regarded as a syndrome or illness.[4] A review article by Robert van Reekum MD et al. from the University of Toronto in the Journal of Neuropsychiatry (2005) claimed that "depression and apathy were a package deal" in some populations which may help illustrate what people mean when they say that "The opposite of love is not hate, it is apathy."