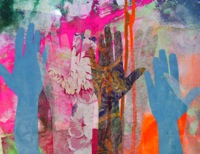 Medieval Latin applausus, from Latin, beating of wings, from applaudere

Applause (Latin applaudere, to strike upon, clap) is primarily the expression of approval by the act of clapping, or striking the palms of the hands together, in order to create noise. Audiences are usually expected to applaud after a performance, such as a musical concert, speech, or play. In most western countries, audience members clap their hands at random to produce a constant noise; however, it tends to synchronize naturally to a weak degree. As a form of mass nonverbal communication, it is a simple indicator of the relative opinion of the entire group; the louder and longer the noise, the stronger the sign of approval.

The custom of applauding may be as old and as widespread as humanity, and the variety of its forms is limited only by the capacity for devising means of making a noise (i.e., stomping of feet or rapping of fists or hands on a table). Within each culture, however, it is usually subject to conventions.

The ancient Romans had a set ritual of applause for public performances, expressing degrees of approval: snapping the finger and thumb, clapping with the flat or hollow palm, waving the flap of the toga, for which the emperor Aurelian substituted handkerchiefs (orarium) that he had distributed to the Roman people.[1] In Roman theatre, at the close of the play, the chief actor called out "Valete et plaudite!", and the audience, guided by an unofficial choregus, chanted their applause antiphonally. This was often organized and paid for.

Similarly, a claque (French for "clapping") was an organized body of professional applauders in French theatres and opera houses who were paid by the performer(s) to create the illusion of an increased level of approval by the audience.

With the proliferation of Christianity, customs of the theatre were adopted by the churches. Eusebius[3] says that Paul of Samosata encouraged the congregation to applaud his preaching by waving linen cloths (οθοναις), and in the 4th and 5th centuries applause of the rhetoric of popular preachers had become an established custom. Applause in church eventually fell out of fashion, however, and, partly by the influence of the quasi-religious atmosphere of the performances of Richard Wagner's operas at the Bayreuth Festspielhaus, the reverential spirit that inspired this soon extended back to the theatre and the concert hall.[1]