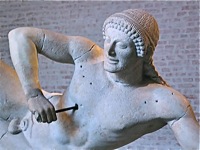 In language, an archaism (from the Greek: ἀρχαϊκός, archaïkós, 'old-fashioned, antiquated', ultimately ἀρχαῖος, archaîos, 'from the beginning, ancient') is the use of a form of speech or writing that is no longer current. This can either be done deliberately (to achieve a specific effect) or as part of a specific jargon (for example in law) or formula (for example in religious contexts). Many nursery rhymes contain archaisms. Archaic elements that occur only in certain fixed expressions (for example 'be that as it may') are not considered to be archaisms.

Archaisms are most frequently encountered in poetry, law, science, technology, geography and ritual writing and speech. Their deliberate use can be subdivided into literary archaisms, which seeks to evoke the style of older speech and writing; and lexical archaisms, the use of words no longer in common use. Archaisms are kept alive by these ritual and literary uses and by the study of older literature. Should they remain recognised, they can be revived, as the word anent was in this past century.

Because they are fields of continual discovery and re-invention, science and technology have historically generated forms of speech and writing which have dated and fallen into disuse relatively quickly. However the emotional associations of certain words (for example: 'Wireless' rather than 'Radio' for a generation of British citizens who lived through the second world war) have kept them alive even though the older word is clearly an archaism.

A similar desire to evoke a former age means that archaic place names are frequently used in circumstances where doing so conveys a political or emotional subtext, or when the official new name is not recognised by all (for example: 'Persia' rather than 'Iran', 'Bombay' rather than 'Mumbai', 'Madras' rather than 'Chennai'). So, a restaurant seeking to conjure up historic associations might prefer to call itself Old Bombay or refer to Persian cuisine in preference to using the newer place name. A notable contemporary example is the name of the airline Cathay Pacific, which uses the archaic Cathay ("China").

The compound adverbs and prepositions found in the writing of lawyers (e.g. heretofore, hereunto, thereof) are examples of archaisms as a form of jargon. Some phraseologies, especially in religious contexts, retain archaic elements that are not used in ordinary speech in any other context: "With this ring I thee wed." Archaisms are also used in the dialogue of historical novels in order to evoke the flavour of the period. Some may count as inherently funny words and are used for humorous effect.

In anthropological studies of culture, archaism is defined as the absence of writing and subsistence economy. In history, archaism is used to connote a superior, albeit mythical, "golden age".