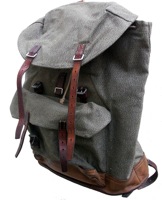 The word backpack was coined in the United States in the 1910s. Moneybag and packsack were used before; they now occur mainly as regionalisms. The word rucksack is a German loanword mainly used in the UK and in western military forces: in German 'der Rücken' means 'the back' (the part of the body), and Sack for bag. The name Rucksack is cognate with Danish Rygsæk, Norwegian Ryggsekk, Dutch Rugzak, Afrikaans Rugsak and Swedish Ryggsäck. Alternative names include Haversack (the term haversack more properly describes a small cloth bag on a strap worn over one shoulder, and used to carry one or more 'havers' or havercakes or oatcakes.). In German language a backpack with a rigid framework (or the framework itself) is called Kraxe. The British Army uses the word bergen for a large load-carrying rucksack, from a design issued during the Second World War.

b : a camping pack (as of canvas or nylon) supported by a usually aluminum frame and carried on the back
c : knapsack

A backpack (also called rucksack, knapsack, packsack, pack, or bergen) is, in its simplest form, a cloth sack carried on one's back and secured with two straps that go over the shoulders, but there can be exceptions. Lightweight types of backpacks are sometimes worn on only one shoulder strap.

Backpacks are often preferred to handbags for carrying heavy loads or carrying any sort of equipment, because of the limited capacity to carry heavy weights for long periods of time in the hands. Large backpacks, used to carry loads over 10 kg (22 lbs), usually offload the largest part (up to about 90%) of their weight onto padded hip belts, leaving the shoulder straps mainly for stabilising the load. This improves the potential to carry heavy loads, as the hips are stronger than the shoulders, and also increases agility and balance, since the load rides nearer the wearer's own center of mass.

In ancient times, the backpack was used as a means to carry the hunter's larger game and other types of prey and as a way of easier transport for other materials. In the cases of larger hunts, the hunters would dismember their prey and distribute the pieces of the animal around, each one packing the meat into many wrappings and then into bags which they placed on to their backs. The bag itself was made up of different animal hide and skin (depending on what sorts of animals were in the area) and sewn together by animal intestines, which were woven together tightly to make a sturdy thread-like material.

Backpacks can often simply be referred to as "packs", especially in outdoors contexts; though sometimes ambiguous compared to other bags such as saddlebags and duffel bags, context is generally sufficient for identification. A bodypack is a backpack fitted with pocket(s) that are suspended on the wearer's front side (chest) and loaded in such a way that the load in the front and the load in the back are about equal. The majority of the load on a bodypack is carried by the hips.

The ideal load carrying system should not disturb the wearer's natural posture, balance and movement of the body. The load must be dispersed onto the skeletal structure in a balanced way, and should not produce forces on the body forward, aft, right, or left.[1]