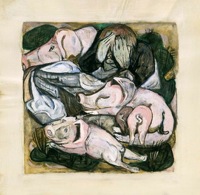 Backsliding, also known as falling away, is a term used within Christianity to describe a process by which an individual who has converted to Christianity reverts to pre-conversion habits and/or lapses or falls into sin, when a person turns from God to pursue their own desire. In Christianity, within denominations which teach Arminianism, such as the Methodist Church and Pentecostal Holiness Church, as well as in the Roman Catholic Church, backsliding is a state in which any free willed believer can adopt, which is a doctrine rejected by Calvinists. In these denominations, it is taught that the backslidden individual is in danger of Hell if he does not repent. Historically, backsliding was considered a trait of the Biblical Israel which would turn from the Abrahamic God to follow idols. In the New Testament church the story of the Prodigal Son has become a representation of a backslider.

When primitive man felt that his communion with God had been interrupted, he resorted to sacrifice of some kind in an effort to make atonement, to restore friendly relationship. The hunger and thirst for righteousness leads to the discovery of truth, and truth augments ideals, and this creates new problems for the individual religionists, for our ideals tend to grow by geometrical progression, while our ability to live up to them is enhanced only by arithmetical progression.

The sense of guilt (not the consciousness of sin) comes either from interrupted spiritual communion or from the lowering of one's moral ideals. Deliverance from such a predicament can only come through the realization that one's highest moral ideals are not necessarily synonymous with the will of God. Man cannot hope to live up to his highest ideals, but he can be true to his purpose of finding God and becoming more and more like him. (103:4.2,3 )