From Nordan Symposia
(Redirected from Bosom)
Jump to navigationJump to search 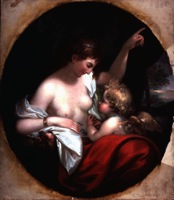 b : a woman's breasts regarded especially as a single feature <a woman with an ample bosom>; also : breast

b : the security and intimacy of or like that of being hugged to someone's bosom <the bosom of her family>

The breast is the upper ventral region of an animal’s torso, particularly that of mammals, including human beings. The breasts of a female primate’s body contain the mammary glands, which secrete milk used to feed infants.

Both men and women develop breasts from the same embryological tissues. However, at puberty, female sex hormones, mainly estrogen, promote breast development which does not occur in men. As a result, women's' breasts become far more prominent than those of men.

In European pre-historic societies, sculptures of female figures with pronounced or highly exaggerated breasts were common. A typical example is the so-called Venus of Willendorf, one of many Paleolithic Venus figurines with ample hips and bosom. Artifacts such as bowls, rock carvings and sacred statues with breasts have been recorded from 15,000 BC up to late antiquity all across Europe, North Africa and the Middle East. Many female deities representing love and fertility were associated with breasts and breast milk. Figures of the Phoenician goddess Astarte were represented as pillars studded with breasts. Isis, an Egyptian goddess who represented, among many other things, ideal motherhood, was often portrayed as suckling pharaohs, thereby confirming their divine status as rulers. Even certain male deities representing regeneration and fertility were occasionally depicted with breast-like appendices, such as the river god Hapy who was considered to be responsible for the annual overflowing of the Nile. Female breasts were also prominent in the Minoan civilization in the form of the famous Snake Goddess statuettes. In Ancient Greece there were several cults worshipping the "Kourotrophos", the suckling mother, represented by goddesses such as Gaia, Hera and Artemis. The worship of deities symbolized by the female breast in Greece became less common during the first millennium. The popular adoration of female goddesses decreased significantly during the rise of the Greek city states, a legacy which was passed on to the later Roman empire.

During the middle of the first millennium BC, Greek culture experienced a gradual change in the perception of female breasts. Women in art were covered in clothing from the neck down, including female goddesses like Athena, the patron of Athens who represented heroic endeavor. There were exceptions: Aphrodite, the goddess of love, was more frequently portrayed fully nude, though in postures that were intended to portray shyness or modesty, a portrayal that has been compared to modern pin ups by historian Marilyn Yalom. Although nude men were depicted standing upright, most depictions of female nudity in Greek art occurred "usually with drapery near at hand and with a forward-bending, self-protecting posture". A popular legend at the time was of the Amazons, a tribe of fierce female warriors who socialized with men only for procreation and even removed one breast to become better warriors. The legend was a popular motif in art during Greek and Roman antiquity and served as an antithetical cautionary tale.