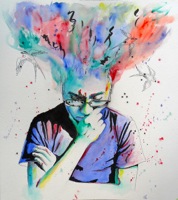 Brainstorming is a group or individual creativity technique by which efforts are made to find a conclusion for a specific problem by gathering a list of ideas spontaneously contributed by its member(s). The term was popularized by Alex Faickney Osborn in the 1953 book Applied Imagination. Osborn claimed that brainstorming was more effective than individuals working alone in generating ideas, although more recent research has questioned this conclusion. Today, the term is used as a catch all for all group ideation sessions.

Research has shown individual brainstorming to be more effective in idea-generation than group brainstorming.

Some research claims to refute Osborn's claim that group brainstorming could generate more ideas than individuals working alone. Research from Michael Diehl and Wolfgang Stroebe demonstrated that groups brainstorming together produce fewer ideas than individuals working separately. Their conclusions were based on a review of 22 other studies, 18 of which corroborated their findings.[1]