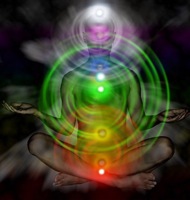 Chakra (derived from the Sanskrit cakraṃ चक्रं, pronounced [ˈtʃəkrə]; Pali: chakka, Chinese: 轮, Tibetan: khorlo) is a Sanskrit word that translates as "wheel" or "turning". [1] Chakra is a concept referring to wheel-like vortices which, according to traditional Indian medicine, are believed to exist in the surface of the etheric double of man.[2] The Chakras are said to be "force centers" or whorls of energy permeating, from a point on the physical body, the layers of the subtle bodies in an ever-increasing fan-shaped formation (the fans make the shape of a love heart). Rotating vortices of subtle matter, they are considered the focal points for the reception and transmission of energies.[3] Seven major chakras or energy centers (also understood as wheels of light) are generally believed to exist, located within the subtle body. It is typical for chakras to be depicted in either of two ways - flower-like or wheel-like.

For lessons on the topic of Chakras, follow this link.

Much of the original information on Chakras comes from the Upanishads, which are difficult to date because they are believed to have been passed down orally for approximately a thousand years before being written down for the first time between 1200–900 BCE.

Paramhans Swami Maheshwarananda describes chakra as [4] : powerhouse in the way it generates and stores energy, with the energy from cosmos pulled in more strongly at these points. The main nadis, Ida, Pingala and Shushumna (sympathetic, parasympathetic, and central nervous system) run along the spinal column in a curved path and cross one another several times. At the points of intersection they form strong energy centers known as chakras. In the human body there are three types of energy centers. The lower or animal chakras are located in the region between the toes and the pelvic region indicating our evolutionary origins in the animal kingdom. The human chakras lie along the spinal column. Finally, the higher or divine Chakras are found between the top of the spine and the crown of the head.

Anodea Judith (1996: p. 5) provides a modern interpretation of the chakras:

A chakra is believed to be a center of activity that receives, assimilates, and expresses life force energy. The word chakra literally translates as wheel or disk and refers to a spinning sphere of bioenergetic activity emanating from the major nerve ganglia branching forward from the spinal column. Generally, six of these wheels are described, stacked in a column of energy that spans from the base of the spine to the middle of the forehead. And the seventh which is beyond the physical region. It is the six major chakras that correlate with basic states of consciousness...

Chakras, as described above, are energy centers along the spine located at major branchings of the human nervous system, beginning at the base of the spinal column and moving upward to the top of the skull. Chakras are considered to be a point or nexus of biophysical energy or prana of the human body. Shumsky states that "prana is the basic component of your subtle body, your energy field, and the entire chakra system...the key to life and source of energy in the universe."[5]

Bhattacharyya's review of Tantric history says that the word chakra is used to mean several different things in the Sanskrit sources:[6]

In Buddhist literature the Sanskrit term cakra (Pali cakka) is used in a different sense of "circle", referring to a Buddhist conception of the 4 circles or states of existence in which gods or men may find themselves.[7][1]