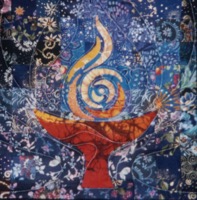 In Christian tradition the Holy Chalice is the vessel which Jesus used at the Last Supper to serve the wine. New Testament texts make no mention of the cup except within the context of the Last Supper and give no significance whatever to the object itself. Herbert Thurston in the Catholic Encyclopedia 1908 concluded that "No reliable tradition has been preserved to us regarding the vessel used by Christ at the Last Supper. In the sixth and seventh centuries pilgrims to Jerusalem were led to believe that the actual chalice was still venerated in the Church of the Holy Sepulchre, having within it the sponge which was presented to Jesus on Calvary." Several surviving standing cups of precious materials are identified in local traditions as the Chalice.[1]