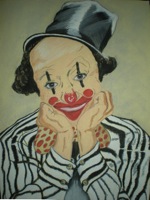 b : a person who habitually jokes and plays the buffoon
c : joker

Clowns are comic performers stereotypically characterized by the grotesque image of the circus clown's colored wigs, stylistic makeup, outlandish costumes, unusually large footwear, and red nose, which evolved to project their actions to large audiences. Other less grotesque styles have also developed, including theatre, television, and film clowns. Peter Berger writes that "It seems plausible that folly and fools, like religion and magic, meet some deeply rooted needs in human society". For this reason, clowning is often considered an important part of training as a physical performance discipline, partly because tricky subject matter can be dealt with, but also because it requires a high level of risk and play in the performer.

The term coulrophobia has been coined to describe those individuals who report a fear of clowns.

The most ancient clowns have been found in the Fifth dynasty of Egypt, around 2400 BCE. Contrary to court jests, clowns have traditionally served a socio-religious and psychological role, and traditionally the role of priest and clown have been held by the same persons.

Clowning was developed from a broad tradition of historical performances, and it is difficult to point out a singular tradition or even a few different ones as being the primary precursors to clowns. However there are a few past prominent forms of entertainment contemporarily linked to clowning as its possible antecedents.

Examples of historical, clown-like comedic performers have been the pantomimus in ancient Greece, the Lazzi of Commedia dell'Arte, bouffons, court jesters, as well as the French mime tradition. On top of this there are many non-European clowning traditions (including clown-like figures in Japanese Kabuki theatre), North American native shaman traditions to consider which may or may not have influenced what we now think of as a clown in the Western world.[1]