From Nordan Symposia
(Redirected from Collapses)
Jump to navigationJump to search 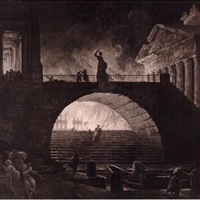 Latin collapsus, past participle of collabi, from com- + labi to fall, slide — more at sleep

Societal collapse broadly includes both quite abrupt societal failures typified by collapses (such as that of the Mayan Civilization), as well as more extended grinding declines of superpowers (like the Roman empire in Western Europe and the Han Dynasty in East Asia). The general subject arises in anthropology, history, sociology, politics and other fields, and more recently in complex systems science.

In systems science it refers to the presumed organizational structures of societies and how they prevent societies from adapting to change in their circumstances. A simple example would be the collapse of the Soviet Union. The abrupt disappearance of a global super-power in the course of a few months, without any external attack, was evidently caused by some kind of structural change in its internal complex system. That researchers, as yet, have very little ability to identify such internal structures for large distributed systems like human societies is an important scientific problem. That genuine structural collapse seems, in many cases, the only plausible explanation supports the idea that such structures exist. However, until they can be concretely identified, scientific inquiry appears limited to the construction of scientific narratives [1], using systems thinking for careful story telling about systemic organization and change. History includes many examples of the appearance and disappearance of human societies with no obvious explanation.

Although a societal collapse is generally an endpoint for that form of administering the social and economic life of a culture, it can be as another kind of change of administration of the same culture (Russian culture would seem to have outlived both the society of the Czars and the society of the Soviet Union, for example). Frequently the phenomenon is also a process of decentralization of authority after a 'classic' period of centralized social order, perhaps replaced by competing centers as the central authority weakens. As when the black plague contributed to breaking the hold of European feudal society on its underclass in the 15th century, societal failure may also result in a degree of empowerment for the lower levels of a former climax society, who escape from the burden of onerous taxes and control by exploitative elites.[1]