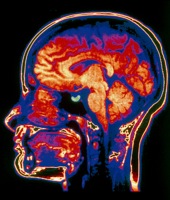 In medicine, a coma (from the Greek κῶμα koma, meaning deep sleep) is a state of unconsciousness, lasting more than 6 hours in which a person cannot be awakened, fails to respond normally to painful stimuli, light or sound, lacks a normal sleep-wake cycle and does not initiate voluntary actions. A person in a state of coma is described as comatose. Glasgow Coma Scale, a person with confusion is considered to be in the mildest coma.

For lessons on the topic of Coma, follow this link.

Coma may result from a variety of conditions, including intoxication (such as illicit drug abuse, overdose or misuse of over the counter medications, prescribed medication, or controlled substances), metabolic abnormalities, central nervous system diseases, acute neurologic injuries such as strokes or herniations, hypoxia, hypothermia, hypoglycemia or traumatic injuries such as head trauma caused by falls or vehicle collisions. It may also be deliberately induced by pharmaceutical agents in order to preserve higher brain functions following brain trauma, or to save the patient from extreme pain during healing of injuries or diseases.

In order for a patient to maintain consciousness, two important neurological components must function impeccably. The first is the cerebral cortex which is the gray matter covering the outer layer of the brain, and the other is a structure located in the brainstem, called reticular activating system (RAS or ARAS). Injury to either or both of these components is sufficient to cause a patient to experience a coma. The human cortex is a group of tightly dense, "gray matter" composed of the nucleus of the neurons whose axons then form the "white matter", and is responsible for the perception of the universe, relay of the sensory input (sensation) via the thalamic pathway, and most importantly directly or indirectly in charge of all the neurological functions, from simple reflexes to complex thinking. Reticular activating system (RAS) on the other hand is a more primitive structure in the brainstem that is tightly in connection with reticular formation (RF), a critical anatomical structure needed for maintenance of arousal. Reticular activating system (RAS) takes its name from the effect it has on the reticular formation, which is via its stimulation. It is therefore necessary to investigate in a comatose patient, the integrity of the bilateral cerebral cortices, and the reticular activating system (RAS).[1]