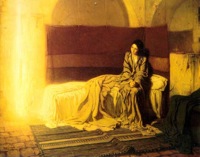 Condescension is a show of disdain and superiority in which the condescending person patronizes, or considers himself superior and "descends" to the level of, the disdained person.

Condescension also functions as another name for accommodation, a theological principle linked to divine revelation within Christianity. The principle of Accommodation is that God, while being in his nature unknowable and unreachable, has nevertheless communicated with mankind in a way in which humans can understand and respond.

The concept of accommodation is relevant to the relationship between scripture and natural science: the concept is that scripture has accommodated, or made allowance for, the original audience's language, general level of understanding, etc.

The 16th century Christian Reformist John Calvin is a key developer of the accommodation concept, in response to that century's discoveries in natural science, foremost Copernicus' theory of heliocentrism that conflicted with medieval theological traditions of reading the Bible "through geocentric spectacles".

The concept of accommodation is thus an alternative method of biblical interpretation to the tradition of biblical literalism, which, together with an insistence on traditional bible interpretation, formed the basis for the Roman Catholic Church's condemnation of Galileo Galilei in the early 17th century.

Accommodation is not an innovation itself of the Reformation Period, but "has a long tradition of use within Judaism and subsequently within Christian theology, and can easily be shown to have been influential within the patristic period."

It appears almost contradictory that the Christian God, as revealed in the Bible, is often described in terms of his supreme transcendence and the inability of limited, finite man to comprehend and know the God who is unlimited and infinite - the contradiction being that even this knowledge can be known by mankind and recorded in scripture.

Although this may appear on the surface to be illogical, the status of the Christian God's unknowability is only true insofar as God acts not to reveal himself. In this line of thinking, no human being can ever hope to even understand or know God via their own powers of discernment. The principle of Accommodation is that God has chosen to reveal aspects of himself to mankind in a way in which mankind is able to understand.