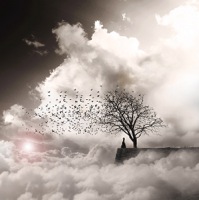 Adams and Eves are semimaterial creatures and, as such, are not transportable by seraphim. They must undergo dematerialization on the system capital before they can be enseraphimed for transport to the world of assignment. The transport seraphim are able to effect such changes in the Material Sons and in other semimaterial beings as enable them to be enseraphimed and thus to be transported through space from one world or system to another. About three days of standard time are consumed in this transport preparation, and it requires the co-operation of a Life Carrier to restore such a dematerialized creature to normal existence upon arrival at the end of the seraphic-transport journey.

While there is this dematerializing technique for preparing the Adams for transit from Jerusem to the evolutionary worlds, there is no equivalent method for taking them away from such worlds unless the entire planet is to be emptied, in which event emergency installation of the dematerialization technique is made for the entire salvable population. If some physical catastrophe should doom the planetary residence of an evolving race, the Melchizedeks and the Life Carriers would install the technique of dematerialization for all survivors, and by seraphic transport these beings would be carried away to the new world prepared for their continuing existence. The evolution of a human race, once initiated on a world of space, must proceed quite independently of the physical survival of that planet, but during the evolutionary ages it is not otherwise intended that a Planetary Adam or Eve shall leave their chosen world.[1]