From Nordan Symposia
(Redirected from Directions)
Jump to navigationJump to search 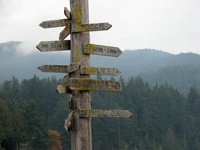 b : assistance in pointing out the proper route —usually used in plural <asked for directions to the beach>

b : tendency, trend
c : a guiding, governing, or motivating purpose

b : a word, phrase, or sign indicating the appropriate tempo, mood, or intensity of a passage or movement in music

For lessons on the related topic of Guidance, follow this link.

Direction is the information contained in the relative position of one point with respect to another point without the distance information. Directions may be either relative to some indicated reference (the violins in a full orchestra are typically seated to the left of the conductor), or absolute according to some previously agreed upon frame of reference (New York City lies due west of Madrid). Direction is often indicated manually by an extended index finger or written as an arrow. On a vertically oriented sign representing a horizontal plane, such as a road sign, "forward" is usually indicated by an upward arrow. Mathematically, direction may be uniquely specified by a unit vector in a given basis, or equivalently by the angles made by the most direct path with respect to a specified set of axes.