From Nordan Symposia
(Redirected from Evaporate)
Jump to navigationJump to search 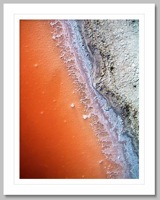 b : to deposit (as a metal) in the form of a film by sublimation

b : expel <evaporate electrons from a hot wire>

Evaporation is a type of phase transition; it is the process by which molecules in a liquid state (e.g. water) spontaneously become gaseous (e.g. water vapor). Generally, evaporation can be seen by the gradual disappearance of a liquid from a substance when exposed to a significant volume of gas. Vaporization and evaporation however, are not entirely the same processes.

On average, the molecules in a glass of water do not have enough heat energy to escape from the liquid. With sufficient heat, the liquid would turn into vapor quickly (see boiling point). When the molecules collide, they transfer energy to each other in varying degrees, based on how they collide. Sometimes the transfer is so one-sided for a molecule near the surface that it ends up with enough energy to escape.

Liquids that do not evaporate visibly at a given temperature in a given gas (e.g. cooking oil at room temperature) have molecules that do not tend to transfer energy to each other in a pattern sufficient to frequently give a molecule the heat energy necessary to turn into vapor. However, these liquids are evaporating. It is just that the process is much slower and thus significantly less visible.

Evaporation is an essential part of the water cycle. Solar energy drives evaporation of water from oceans, lakes, moisture in the soil, and other sources of water. In hydrology, evaporation and transpiration (which involves evaporation within plant stomata) are collectively termed evapotranspiration. Evaporation is caused when water is exposed to air and the liquid molecules turn into water vapor which rises up and forms clouds.[1]