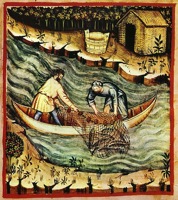 Fishing is the activity of catching [fish. Fish are normally caught in the wild. Techniques for catching fish include hand gathering, spearing, netting, angling and trapping.

The term fishing may be applied to catching other aquatic animals such as molluscs, cephalopods, crustaceans, and echinoderms. The term is not normally applied to catching aquatic mammals, such as whales, where the term whaling is more appropriate, or to farmed fish.

According to FAO statistics, the total number of commercial fishermen and fish farmers is estimated to be 38 million. Fisheries and aquaculture provide direct and indirect employment to over 500 million people. In 2005, the worldwide per capita consumption of fish captured from wild fisheries was 14.4 kilograms, with an additional 7.4 kilograms harvested from fish farms. In addition to providing food, modern fishing is also a recreational pastime.

Fishing is an ancient practice that dates back to, at least, the beginning of the Paleolithic period about 40,000 years ago. Isotopic analysis of the skeletal remains of Tianyuan man, a 40,000 year old modern human from eastern Asia, has shown that he regularly consumed freshwater fish. Archaeology features such as shell middens, discarded fish bones and cave paintings show that sea foods were important for survival and consumed in significant quantities. During this period, most people lived a hunter-gatherer lifestyle and were, of necessity, constantly on the move. However, where there are early examples of permanent settlements (though not necessarily permanently occupied) such as those at Lepenski Vir, they are almost always associated with fishing as a major source of food. Egyptians bringing in fish, and splitting for salting.

The ancient river Nile was full of fish; fresh and dried fish were a staple food for much of the population. The Egyptians had implements and methods for fishing and these are illustrated in tomb scenes, drawings, and papyrus documents. Some representations hint at fishing being pursued as a pastime. In India, the Pandyas, a classical Dravidian Tamil kingdom, were known for the pearl fishery as early as the 1st century BC. Their seaport Tuticorin was known for deep sea pearl fishing. The paravas, a Tamil caste centred in Tuticorin, developed a rich community because of their pearl trade, navigation knowledge and fisheries. Fishing scenes are rarely represented in ancient Greek culture, a reflection of the low social status of fishing. However, Oppian of Corycus, a Greek author wrote a major treatise on sea fishing, the Halieulica or Halieutika, composed between 177 and 180. This is the earliest such work to have survived to the modern day. Pictorial evidence of Roman fishing comes from mosaics. The Greco-Roman sea god Neptune is depicted as wielding a fishing trident. The Moche people of ancient Peru depicted fisherman in their ceramics.[9]

One of the world’s longest trading histories is the trade of dry cod from the Lofoten area of Norway to the southern parts of Europe, Italy, Spain and Portugal. The trade in cod started during the Viking period or before, has been going on for more than 1,000 years and is still important. [[1]