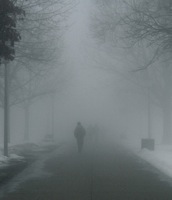 b : a fine spray or a foam for firefighting

b : something that confuses or obscures <hid behind a fog of rhetoric>

Fog is a collection of water droplets or ice crystals suspended in the air at or near the Earth's surface. While fog is a type of a cloud, the term "fog" is typically distinguished from the more generic term "cloud" in that fog is low-lying, and the moisture in the fog is often generated locally (such as from a nearby body of water, like a lake or the ocean, or from nearby moist ground or marshes).

The foggiest place in the world is the Grand Banks off the island of Newfoundland, the meeting place of the cold Labrador Current from the north and the much warmer Gulf Stream from the south. Some of the foggiest land areas in the world include Argentina, Newfoundland, Labrador and Point Reyes, California, each with over 200 foggy days per year. Even in generally warmer southern Europe, thick fog and localized fog is often found in lowlands and valleys, such as the lower part of the Po Valley and the Arno and Tiber valleys, as well as on the Swiss plateau, especially in the Seeland area, in late autumn and winter.Other notably foggy areas include coastal Chile (in the south), coastal Namibia, and the Severnaya Zemlya islands.[1]