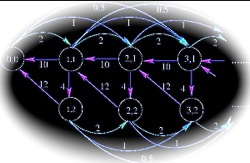 In logic and mathematics, a formal system consists of two components, a formal language plus a set of inference rules or transformation rules. A formal system may be formulated and studied for its intrinsic value, or it may be intended as a description (i.e. a model) of external phenomena.

Some theorists use the term formalism as a rough synonym for formal system, but the term is also used to refer to a particular style of notation, for example, Paul Dirac's "bra-ket notation".

Formal systems in mathematics consist of the following elements:

A formal system is said to be recursive (i.e. effective) if the set of axioms and the set of inference rules are decidable sets or recursively enumerable set or semidecidable sets, according to context.

Formal proofs are sequences of wffs. For a wff to qualify as part of a proof, it might either be an axiom or be the product of applying an inference rule on previous wffs in the proof sequence. The last wff in the sequence is recognized as a theorem.

The point of view that generating formal proofs is all there is to mathematics is often called formalism. David Hilbert founded metamathematics as a discipline for discussing formal systems. Any language that one uses to talk about a formal system is called a metalanguage. The metalanguage may be nothing more than ordinary natural language, or it may be partially formalized itself, but it is generally less completely formalized than the formal language component of the formal system under examination, which is then called the object language, that is, the object of the discussion in question.

Once a formal system is given, one can define the set of theorems which can be proved inside the formal system. This set consists of all wffs of which there is a proof for. Thus all axioms are considered theorems. Unlike the grammar for wffs, there is no guarantee that there will be a |decision procedure for deciding whether a given wff is a theorem or not. The notion of theorem just defined should not be confused with theorems about the formal system, which, in order to avoid confusion, are usually called metatheorems.

In computer science and linguistics a formal grammar is a precise description of a formal language: a set of (computer strings). The two main categories of formal grammar are that of generative grammars, which are sets of rules for how strings in a language can be generated, and that of analytic grammars, which are sets of rules for how a string can be analyzed to determine whether it is a member of the language. In short, an analytic grammar describes how to recognize when strings are members in the set, whereas a generative grammar describes how to write only those strings in the set.