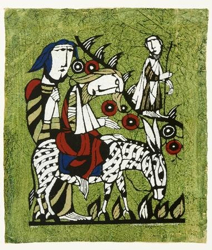 The ethic of reciprocity is a fundamental moral value which "refers to the balance in an interactive system such that each party has both rights and duties, and the subordinate norm of complementarity states that one's rights are the other's obligation. In essence, it is an ethical code that states one has a right to just treatment, and a responsibility to ensure justice for others. Reciprocity is arguably the most essential basis for the modern concept of human rights, though it has its critics.

Many assign the imperative commandment of Golden Rule as instruction for a positive only form of reciprocity. A key element of the golden rule is that a person attempting to live by this rule treats all people, not just members of his or her in-group, with consideration. The golden rule, with roots in a wide range of world cultures, is well suited to be a standard to which different cultures could appeal in resolving conflicts. Principal philosophers and religious figures have stated it in different ways.

For lessons on the topic of Ethics, follow this link.

The Golden Rule was a common principle in ancient Greek philosophy. A few examples:

"Do not to your neighbor what you would take ill from him." (Pittacus)
"Avoid doing what you would blame others for doing." (Thales) Diogenes Laërtius, "The Lives and Opinions of Eminent Philosophers", I,36
"What you wish your neighbors to be to you, such be also to them." (Sextus the Pythagorean)Sextus, 406 B.C.
"Do not do to others what would anger you if done to you by others." (Isocrates)Isocrates, "Nicocles",6
"What thou avoidest suffering thyself seek not to impose on others." (Epictetus) Epictetus, "Encheiridion"
"It is impossible to live a pleasant life without living wisely and well and justly (agreeing 'neither to harm nor be harmed'Epicurus on Freedom

and it is impossible to live wisely and well and justly without living a pleasant life." (Epicurus)Epicurus Principal Doctrines tranls. by Robert Drew Hicks (1925)

Putting oneself in the place of another,
one should not kill nor cause another to kill.Detachment and Compassion in Early Buddhism by Elizabeth J. Harris (enabling.org)

One who, while himself seeking happiness, oppresses with violence other
beings who also desire happiness, will not attain happiness hereafter.

In addition, the Dalai Lama has stated:

From the sacred scriptures of the Baha'i Faith:

"Blessed is he who preferreth his brother before himself." Baha'u'llah;[3]

"And if thine eyes be turned towards justice, choose thou for thy neighbour that which thou choosest for thyself." Baha'u'llah.[4]]

Within Christian circles, the ethic of reciprocity is often called the "Golden Rule". Christianity adopted the ethic from two edicts, found in ("Do not seek revenge or bear a grudge against one of your people, but love your neighbor as yourself. I am the LORD.") and ("But the stranger that dwelleth with you shall be unto you as one born among you, and thou shalt love him as thyself; for ye were strangers in the land of Egypt: I am the LORD your God"). Crucially, Leviticus 19:34 universalizes the edict of Leviticus 19:18 from "one of your people" to all of humankind.

The Old Testament Deuterocanonical books of Tobit and Sirach accepted as part of the Scriptural canon by Catholicism, Eastern Orthodoxy, and the Non-Chalcedonian Churches also express the Silver Rule.

Sirach 31:15 "Recognize that your neighbor feels as you do, and keep in mind your own dislikes."

Several passages in the New Testament quote Jesus of Nazareth espousing the ethic of reciprocity, including the following:

Therefore all things whatsoever ye would that men should do to you, do ye even so to them: for this is the law and the prophets.

And as ye would that men should do to you, do ye also to them likewise.

Jesus then proceeded to tell the parable of the Good Samaritan, indicating that "your neighbour" means a total stranger, or someone that happens to be nearby.

Confucius said in the Analects:

"Never impose on others what you would not choose for yourself." - Analects XV.24, tr. David Hinton

The same idea is also presented in V.12 and VI.30 of the Analects.

The Golden rule appears in the Mahabharata, where Brihaspati says:

"One should never do that to another which one regards as injurious to one’s own self. This, in brief, is the rule of dharma. Other behavior is due to selfish desires." (Mahabharata, (Anusasana Parva, Section CXIII, verse 8 Mahabharata Book 13

In addition to the law of karma, the Bhagavad Gita contains a dialogue between Krishna and Arjuna with the statement:

That one I love who is incapable of ill will, And returns love for hatred. Bhagavad-Gita: Chapter 12, Verse 18,19

As portrayed by Swami Vivekanand- Do good and forget, don't expect any reward

In his Last Sermon, the Muhammad cautioned believers:

In Jainism, the ethic of reciprocity is firmly embedded in its entire philosophy and can be seen in its clearest form in the doctrines of Ahimsa and Karma

In support of this Truth, I ask you a question - "Is sorrow or pain desirable to you ?" If you say "yes it is", it would be a lie. If you say, "No, It is not" you will be expressing the truth. Just as sorrow or pain is not desirable to you, so it is to all which breathe, exist, live or have any essence of life. To you and all, it is undesirable, and painful, and repugnant. [5] Sutra 155-6

"All the living beings wish to live and not to die; that is why unattached saints prohibit the killing of living beings." verse 148

"Just as pain is not agreeable to you, it is so with others. Knowing this principle of equality treat other with respect and compassion. verse 150

The ethic of reciprocity is set forth in the Great Commandment ("You shall not take vengeance or bear a grudge against your countrymen. Love your fellow as yourself: I am the LORD." ("The stranger who resides with you shall be to you as one of your citizens; you shall love him as yourself, for you were strangers in the land of Egypt: I the LORD am your God."

The Sage Hillel formulated the Golden Rule in order to illustrate the underlying principles of Jewish moral law:

That which is hateful to you, do not do to your fellow. That is the whole Torah; the rest is the explanation; go and learn. Talmud, Shabbat 31a

Thou shalt not take vengeance, nor bear any grudge against the children of thy people, but thou shalt love thy neighbour as thyself: I am the LORD.

None of these traditional formulations speak of any positive duty to do unto others as you would have them do unto you.

Many people have criticized the golden rule; George Bernard Shaw once said that "The golden rule is that there are no golden rules". Shaw also criticized the golden rule, "Do not do unto others as you would expect they should do unto you. Their tastes may not be the same." (Maxims for Revolutionists). "The golden rule is a good standard which is further improved by doing unto others, wherever possible, as they want to be done by." Karl Popper [6] Philosophers, such as Immanuel Kant, Friedrich Nietzsche, and Bertrand Russell, have objected to the rule on a variety of grounds. [7] The most serious among these is its application. How does one know how others want to be treated? The obvious way is to ask them, but this cannot be done if one assumes they have not reached a particular and relevant understanding.

Differences in values or interests

Shaw's comment about differing tastes suggests that if your values are not shared with others, the way you want to be treated will not be the way they want to be treated. For example, it has been said that a sadist is just a masochist who follows the golden rule. Another often used example of this inconsistency is that of the man walking into a bar looking for a fight. [8] How would you feel, if a million Soviet troops stormed your Reich Capital? It could also be used by a seducer to suggest that he should kiss an object of his affection because he wants that person to kiss him. Similar objections also apply to the so-called "platinum rule," for if a seducer wants a woman to kiss him, but she does not want him to, it follows from this rule that the seducer should not kiss her--but that she should kiss him.

Immanuel Kant famously criticized the golden rule for not being sensitive to differences of situation, noting that a prisoner duly convicted of a crime could appeal to the golden rule while asking the judge to release him, pointing out that the judge would not want anyone else to send him to prison, so he should not do so to others. Immanuel Kant, Groundwork of the Metaphysics of Morals, Cambridge University Press 1997, p68, also his Critique of Practical Reason, trans. T.K. Abbott, 6th ed., p48note

Walter Terence Stace, in The Concept of Morals (1937), wrote:

"Mr. Bernard Shaw's remark "Do not do unto others as you would that they should do unto you. Their tastes may be different" is no doubt a smart saying. But it seems to overlook the fact that "doing as you would be done by" includes taking into account your neighbor's tastes as you would that he should take yours into account. Thus the "golden rule" might still expresss the essence of a universal morality even if no two men in the world had any needs or tastes in common".

It is possible, then, that the golden rule can itself guide us in identifying which differences of situation are morally relevant. We would often want other people to ignore our race or nationality when deciding how to act towards us, but would also want them to not ignore our differing preferences in food, desire for aggressiveness, and so on. The platinum rule, and perhaps other variants, might also be self-correcting in this same manner.

Science of the Golden Rule

There has been research published arguing that some of fair play and the Golden Rule may be stated and rooted in terms of neuroscientific principles.Pfaff, Donald W., "The Neuroscience of Fair Play: Why We (Usually) Follow the Golden Rule", Dana Press, The Dana Foundation, New York, 2007. ISBN 9781932594270