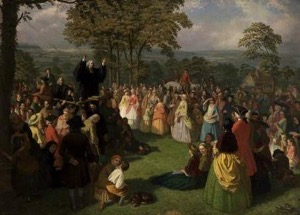 The term Great Awakening can refer to several periods of religious revival in American religious history. Historians and theologians identify three or four waves of increased religious enthusiasm occurring between the early 18th century and the late 19th century. Each of these "Great Awakenings" was characterized by widespread revivals led by evangelical Protestant ministers, a sharp increase of interest in religion, a profound sense of conviction and redemption on the part of those affected, an increase in evangelical church membership, and the formation of new religious movements and denominations.

The First Great Awakening began in the 1730s and lasted to about 1743, though pockets of revivalism had occurred in years prior, especially amongst the ministry of Solomon Stoddard, Jonathan Edwards's grandfather. Edwards's congregation was involved in a revival later called the "Frontier Revivals" in the mid-1730s, though this was on the wane by 1737. But as American religious historian Sydney E. Ahlstrom noted the Great Awakening "was still to come, ushered in by the Grand Itinerant", the great British Evangelist George Whitefield. Whitefield arrived in Georgia in 1738, and returned in 1739 for a second visit of the Colonies, making a "triumphant campaign north from Philadelphia to New York, and back to the South."[2] In 1740, he visited New England, and "at every place he visited, the consequences were large and tumultuous." Ministers from various evangelical Protestant denominations supported the Great Awakening. In the middle colonies, he influenced not only the British churches, but the Dutch and Germans.

Joseph Tracy, the minister, historian, and preacher who gave this religious phenomenon its name in his influential 1842 book The Great Awakening, saw the First Great Awakening as a precursor to the American Revolution. The evangelical movement of the 1740s played a key role in the development of democratic thought, as well as the belief of the free press and the belief that information should be shared and completely unbiased and uncontrolled. These concepts ushered in the period of the American Revolution. This contributed to create a demand for religious freedom.

The Second Great Awakening was a religious revival that occurred in the United States beginning in the late eighteenth century and lasting until the middle of the nineteenth century. While it occurred in all parts of the United States, it was especially strong in the Northeast and the Midwest. This awakening was unique in that it moved beyond the educated elite of New England to those who were less wealthy and less educated. The center of revivalism was the so-called Burned-over district in western New York. Named for its overabundance of hellfire-and-damnation preaching, the region produced dozens of new denominations, communal societies, and reform.

In addition to a religious movement, other reform movements such as temperance, abolition, and women's rights also grew in antebellum America. The temperance movement encouraged people to abstain from consuming alcoholic drinks in order to preserve family order. The abolition movement fought to abolish slavery in the United States. The women's rights movement grew from female abolitionists who realized that they too could fight for their own political rights. In addition to these causes, reforms touched nearly every aspect of daily life, such as restricting the use of tobacco and dietary and dress reforms. The abolition movement emerged in the North from the wider Second Great Awakening 1800-1840.

The Third Great Awakening in the 1850s-1900s was characterized by new denominations, active missionary work, Chautauquas, and the Social Gospel approach to social issues. The Y.M.C.A. (founded in 1844) played a major role in fostering revivals in the cities in the 1858 Awakening and after. The revival of 1858 produced the leadership, such as that of Dwight L. Moody, out of which came religious work carried on in the armies during the civil war. The Christian and Sanitary Commissions and numerous Freedmen's Societies were also formed in the midst of the War.

The Fourth Great Awakening is a debated concept that has not received the acceptance of the first three. Advocates such as economist Robert Fogel say it happened in the late 1960s and early 1970s. Others call this time the Charismatic Movement. Some of the ministers of the Charismatic Movement were Kenneth Hagin, Chuck Smith,John Wimber, and Kathryn Kuhlman. The Vineyard Movement and Calvary Chapel emerged during this movement. Both these movements still exist. Expository teaching along with the Signs and Wonders movement emerged in the 1970s and 1980s. Mainline Protestant denominations weakened sharply in both membership and influence while the most conservative religious denominations grew rapidly in numbers, spread across the United States, had grave internal theological battles and schisms, and became politically powerful. Most of these organizations still stand today.