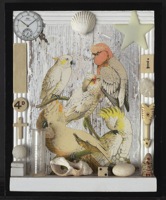 b : the relationship between a feudal lord and his vassal
c : an act done or payment made in meeting the obligations of vassalage

b : something that shows respect or attests to the worth or influence of another : tribute <his long life filled with international homages to his unique musical talent — People>

Homage or hommage is a show of respect to someone or something.

It was originally a declaration of fealty in the feudal system - swearing that one was the man (French: homme) of the feaudal lord.[1] The concept then became used figuratively for an acknowledgement of quality or superiority. For example, a man might pay homage to a lady, so honouring her beauty and other graces. In German scholarship, followers of a great scholar developed the custom of honouring their mentor by producing papers for a festschrift dedicated to him.[2]

The concept now often appears in the arts where one author shows respect to a topic by calling it an homage, such as Homage to Catalonia. Alternatively, creative artists may show respect to a veteran of the field or to an admired practitioner by alluding to their work.[3] In rock music this can take the form of a tribute album or of a sample.[4] As of 2010 the digital techniques used to generate many forms of media make it easy to borrow from other works and this remediation may be used to pay homage to them.[5]

In a simple form, swearing homage or fealty exclusively to a single acknowledged superior could strengthen society on clear-cut hierarchical lines. But Bloch notes the effects of "doing homage to several lords, the true scourge of vassalage" as it developed in the 11th and 12th centuries in Europe.[6]