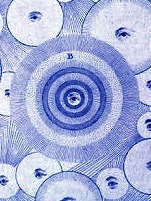 As a time-space creature would view the origin and differentiation of Reality, the eternal and infinite I AM achieved Deity liberation from the fetters of unqualified infinity through the exercise of inherent and eternal free will, and this divorcement from unqualified infinity produced the first absolute divinity-tension. This tension of infinity differential is resolved by the Universal Absolute, which functions to unify and co-ordinate the dynamic infinity of Total Deity and the static infinity of the Unqualified Absolute.

In this original transaction the theoretical I AM achieved the realization of personality by becoming the Eternal Father of the Original Son simultaneously with becoming the Eternal Source of the Isle of Paradise. Coexistent with the differentiation of the Son from the Father, and in the presence of Paradise, there appeared the person of the Infinite Spirit and the central universe of Havona. With the appearance of coexistent personal Deity, the Eternal Son and the Infinite Spirit, the Father escaped, as a personality, from otherwise inevitable diffusion throughout the potential of Total Deity. Thenceforth it is only in Trinity association with his two Deity equals that the Father fills all Deity potential, while increasingly experiential Deity is being actualized on the divinity levels of Supremacy, Ultimacy, and Absoluteness.

For lessons on the topic of I AM, follow this link.

The concept of the I AM is a philosophic concession which we make to the time-bound, space-fettered, finite mind of man, to the impossibility of creature comprehension of eternity existences--nonbeginning, nonending realities and relationships. To the time-space creature, all things must have a beginning save only the ONE UNCAUSED--the primeval cause of causes. Therefore do we conceptualize this philosophic value-level as the I AM, at the same time instructing all creatures that the Eternal Son and the Infinite Spirit are coeternal with the I AM; in other words, that there never was a time when the I AM was not the Father of the Son and, with him, of the Spirit.

The Infinite is used to denote the fullness--the finality--implied by the primacy of the First Source and Center. The theoretical I AM is a creature-philosophic extension of the "infinity of will," but the Infinite is an actual value-level representing the eternity-intension of the true infinity of the absolute and unfettered free will of the Universal Father. This concept is sometimes designated the Father-Infinite.

Much of the confusion of all orders of beings, high and low, in their efforts to discover the Father-Infinite, is inherent in their limitations of comprehension. The absolute primacy of the Universal Father is not apparent on subinfinite levels; therefore is it probable that only the Eternal Son and the Infinite Spirit truly know the Father as an infinity; to all other personalities such a concept represents the exercise of faith.

It has been sometime stated that unity begets duality, that duality begets triunity, and that triunity is the eternal ancestor of all things. There are, indeed, three great classes of primordial relationships, and they are:

1. Unity relationships. Relations existent within the I AM as the unity thereof is conceived as a threefold and then as a sevenfold self-differentiation.

2. Duality relationships. Relations existent between the I AM as sevenfold and the Seven Absolutes of Infinity.

3. Triunity relationships. These are the functional associations of the Seven Absolutes of Infinity.

Triunity relationships arise upon duality foundations because of the inevitability of Absolute interassociation. Such triunity associations eternalize the potential of all reality; they encompass both deified and undeified reality.

The I AM is unqualified infinity as unity. The dualities eternalize reality foundations. The triunities eventuate the realization of infinity as universal function.

Pre-existentials become existential in the seven Absolutes, and existentials become functional in the triunities, the basic association of Absolutes. And concomitant with the eternalization of the triunities the universe stage is set--the potentials are existent and the actuals are present--and the fullness of eternity witnesses the diversification of cosmic energy, the outspreading of Paradise spirit, and the endowment of mind together with the bestowal of personality, by virtue of which all of these Deity and Paradise derivatives are unified in experience on the creature level and by other techniques on the supercreature level.

I am that I am (|Hebrew: אהיה אשר אהיה, pronounced Ehyeh asher ehyeh) is a common English translation (King James Bible and others) of the response God used in the Bible when Moses asked for his name (Exodus 3:14). It is one of the most famous verses in the Torah. Hayah means "existed" or "was" in Hebrew; "ehyeh" is the first person singular imperfect form. Ehyeh asher ehyeh is generally interpreted to mean I am that I am, though it more literally translates as "I-shall-be that I-shall-be."

The word Ehyeh is used a total of 43 places in the Old Testament, where it is usually translated as "I will be" -- as is the case for its first occurrence, in Exodus 3:12 -- or "I shall be," as is the case for its final occurrence in Zechariah 8:8. It stems from the Hebrew conception of monotheism that God exists within each and everyone and by himself, the uncreated Creator who does not depend on anything or anyone; therefore I am who I am. Some scholars state the Tetragrammaton itself derives from the same verbal root, but others counter that it may simply sound similar as intended by God, such as Psalm 119 and the Hebrew words "shoqed" (watching) and "shaqed" (almond branch) found in Jeremiah 1:11-12.

Some of the salient points are the following:

203
God revealed himself to his people Israel by making his name known to them. A name expresses a person's essence and identity and the meaning of this person's life. God has a name; he is not an anonymous force. To disclose one's name is to make oneself known to others; in a way it is to hand oneself over by becoming accessible, capable of being known more intimately and addressed personally.

206
In revealing his mysterious name, YHWH ("I AM HE WHO IS", "I AM WHO AM" or "I AM WHAT I AM"), God says who he is and by what name he is to be called. This divine name is mysterious just as God is mystery. It is at once a name revealed and something like the refusal of a name, and hence it better expresses God as what he is - infinitely above everything that we can understand or say: he is the "hidden God", his name is ineffable, and he is the God who makes himself close to men.

207
God, who reveals his name as "I AM", reveals himself as the God who is always there, present to his people in order to save them.

210
After Israel's sin, when the people had turned away from God to worship the golden calf, God hears Moses' prayer of intercession and agrees to walk in the midst of an unfaithful people, thus demonstrating his love. When Moses asks to see his glory, God responds "I will make all my goodness pass before you, and will proclaim before you my name 'the LORD' [YHWH]." Then the LORD passes before Moses and proclaims, "YHWH, YHWH, a God merciful and gracious, slow to anger, and abounding in steadfast love and faithfulness"; Moses then confesses that the LORD is a forgiving God.

211
The divine name, "I Am" or "He Is", expresses God's faithfulness: despite the faithlessness of men's sin and the punishment it deserves, he keeps "steadfast love for thousands"... By giving his life to free us from sin, Jesus reveals that he himself bears the divine name: "When you have lifted up the Son of man, then you will realize that "I AM"."

212
In God "there is no variation or shadow due to change."

213
The revelation of the ineffable name "I AM WHO AM" contains then the truth that God alone IS. The Greek Septuagint translation of the Hebrew Scriptures, and following it the Church's tradition, understood the divine name in this sense: God is the fullness of Being and of every perfection, without origin and without end. All creatures receive all that they are and have from him; but he alone is his very being, and he is of himself everything that he is.

Kabbalists have long deemed that the Torah contains esoteric information. The response given by God is considered significant by many Kabbalists, because it is seen as proof in the divine nature of God's name, a central idea in Kabbalah (and to a lesser degree Judaism in general).

Some religious groups believe that this phrase or at least the "I am" part of the phrase is an actual name of God, or to lesser degree the sole name of God. It can be found in many lists where other common names of God are shown.

In the Hindu Advaita Vedanta, the South Indian sage Ramana Maharshi mentions that of all the definitions of God, "none is indeed so well put as the biblical statement “I am that I am”". He maintained that although Hindu scripture contains similar statements, the Mahavakyas, these are not as direct as Jehovah. Further the "I am" is explained by Sri Nisargadatta Maharaj as an abstraction in the mind of the Stateless State, of the Absolute, or the Supreme Reality, called Parabrahman. It is pure awareness, prior to thoughts, free from perceptions, associations, memories.

It has also been argued that while "I am who I am" is a literal translation, a more accurate translation on meaning is "Mind your own business".