From Nordan Symposia
(Redirected from Insect)
Jump to navigationJump to search 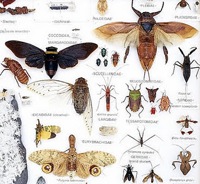 The word insect dates back to 1600, from the Latin word insectum meaning "with a notched or divided body," literally "cut into," from neuter plural of insectare "to cut into, to cut up," from in- "into" + secare "to cut"; from the fact that insects are "cut into" three sections. The word created by Pliny the Elder's loan-translation of the Greek word ἔντομος or "insect" (as in entomology), which was Aristotle's term for this class of life, also in reference to their "notched" bodies, first documented in English in 1601 in Holland's translation of Pliny. Translations of Aristotle's term also form the usual word for "insect" in Welsh (trychfil, from trychu "cut" + mil "animal"), Serbo-Croatian (zareznik, from rezati "cut"), Russian (насекомое nasekomoe, from sekat "cut"), etc.

For lessons on the topic of Insects, follow this link.

b : any of a class (Insecta) of arthropods (as bugs or bees) with well-defined head, thorax, and abdomen, only three pairs of legs, and typically one or two pairs of wings

Insects (from Latin insectum, a calque of Greek ἔντομον [éntomon], "cut into sections") are a class of living creatures within the arthropods that have a chitinous exoskeleton, a three-part body (head, thorax, and abdomen), three pairs of jointed legs, compound eyes, and two antennae. They are among the most diverse groups of animals on the planet, including more than a million described species and represent more than half of all known living organisms. The number of extant species is estimated at between six and ten million and potentially represent over 90% of the differing metazoan life forms on Earth. Insects may be found in nearly all environments, although only a small number of species occur in the oceans, a habitat dominated by another arthropod group, the crustaceans.

The life cycles of insects vary but most hatch from eggs. Insect growth is constrained by the inelastic exoskeleton and development involves a series of molts. The immature stages can differ from the adults in structure, habit and habitat and can include a passive pupal stage in those groups that undergo complete metamorphosis. Insects that undergo incomplete metamorphosis lack a pupal stage and adults develop through a series of nymphal stages. The higher level relationship of the hexapoda is unclear. Fossilized insects of enormous size have been found from the Paleozoic Era, including giant dragonflies with wingspans of 55 to 70 cm (22–28 in). The most diverse insect groups appear to have coevolved with flowering plants.

Insects typically move about by walking, flying or occasionally swimming. As it allows for rapid yet stable movement, many insects adopt a tripedal gait in which they walk with their legs touching the ground in alternating triangles. Insects are the only invertebrates to have evolved flight. Many insects spend at least part of their life underwater, with larval adaptations that include gills and some adult insects are aquatic and have adaptations for swimming. Some species, like water striders, are capable of walking on the surface of water. Insects are mostly solitary, but some insects, such as certain bees, ants, and termites are social and live in large, well-organized colonies. Some insects, like earwigs, show maternal care, guarding their eggs and young. Insects can communicate with each other in a variety of ways. Male moths can sense the pheromones of female moths over distances of many kilometers. Other species communicate with sounds: crickets stridulate, or rub their wings together, to attract a mate and repel other males. Lampyridae in the beetle order Coleoptera communicate with light.

Humans regard certain insects as pests and attempt to control them using insecticides and a host of other techniques. Some insects damage crops by feeding on sap, leaves or fruits, a few bite humans and livestock, alive and dead, to feed on blood and some are capable of transmitting diseases to humans, pets and livestock. Nevertheless, without insects to pollinate flowers, the human race would soon run out of food because many of the crop plants that we rely on would not be able to reproduce. Many other insects are considered ecologically beneficial as predators and a few provide direct economic benefit. Silkworms and bees have been used extensively by humans for the production of silk and honey, respectively.[1]