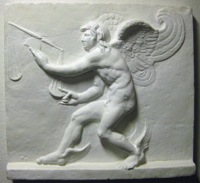 Kairos (καιρός) is an ancient Greek word meaning the right or opportune moment (the supreme moment). The ancient Greeks had two words for time, chronos and kairos. While the former refers to chronological or sequential time, the latter signifies a time between, a moment of indeterminate time in which something special happens. What the special something is depends on who is using the word. While chronos is quantitative, kairos has a qualitative nature. Kairos also means weather in both ancient and modern Greek. The plural, καιροί (kairoi (Ancient Gk. and Mod. Gk.)) means the times.

In rhetoric, kairos is "a passing instant when an opening appears which must be driven through with force if success is to be achieved."

Kairos was central to the Sophists, who stressed the rhetor's ability to adapt to and take advantage of changing, contingent circumstances. In Panathenaicus, Isocrates writes that educated people are those “who manage well the circumstances which they encounter day by day, and who possess a judgment which is accurate in meeting occasions as they arise and rarely misses the expedient course of action".

Kairos is also very important in Aristotle's scheme of rhetoric. Kairos is, for Aristotle, the time and space context in which the proof will be delivered. Kairos stands alongside other contextual elements of rhetoric: The Audience, which is the psychological and emotional makeup of those who will receive the proof; and To Prepon, which is the style with which the orator clothes the proof.

In the New Testament kairos means "the appointed time in the purpose of God", the time when God acts (e.g. Mark 1.15, the kairos is fulfilled). It differs from the more usual word for time which is chronos (kronos).

In the Eastern Orthodox and Eastern Catholic churches, before the Divine Liturgy begins, the Deacon exclaims to the Priest, "Kairos tou poiesai to Kyrio" ("It is time [kairos] for the Lord to act"); indicating that the time of the Liturgy is an intersection with Eternity.

In The Interpretation of History, neo-orthodox Lutheran theologian Paul Tillich made prominent use of the term. For him, the kairoi are those crises in history (see Christian existentialism) which create an opportunity for, and indeed demand, an existential decision by the human subject - the coming of Christ being the prime example (compare Karl Barth's use of Geschichte as opposed to Historie). In the Kairos Document, an example of liberation theology in South Africa under apartheid, the term kairos is used to denote "the appointed time", "the crucial time" into which the document or text is spoken.[1]