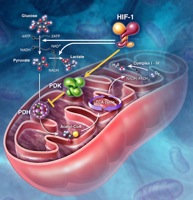 Metabolism is the set of chemical reactions that happen in living organisms to maintain life. These processes allow organisms to grow and reproduce, maintain their structures, and respond to their environments. Metabolism is usually divided into two categories. Catabolism breaks down organic matter, for example to harvest energy in cellular respiration. Anabolism uses energy to construct components of cells such as proteins and nucleic acids.

The chemical reactions of metabolism are organized into metabolic pathways, in which one chemical is transformed through a series of steps into another chemical, by a sequence of enzymes. Enzymes are crucial to metabolism because they allow organisms to drive desirable reactions that require energy and will not occur by themselves, by coupling them to spontaneous reactions that release energy. As enzymes act as catalysts they allow these reactions to proceed quickly and efficiently. Enzymes also allow the regulation of metabolic pathways in response to changes in the cell's environment or signals from other cells.

The metabolism of an organism determines which substances it will find nutritious and which it will find poisonous. For example, some prokaryotes use hydrogen sulfide as a nutrient, yet this gas is poisonous to animals. The speed of metabolism, the metabolic rate, also influences how much food an organism will require.

A striking feature of metabolism is the similarity of the basic metabolic pathways and components between even vastly different species. For example, the set of carboxylic acids that are best known as the intermediates in the citric acid cycle are present in all organisms, being found in species as diverse as the unicellular bacteria Escherichia coli and huge multicellular organisms like elephants. These striking similarities in metabolism are probably due to the high efficiency of these pathways, and their early appearance in evolutionary history.