From Nordan Symposia
(Redirected from Migrate)
Jump to navigationJump to search 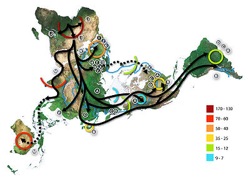 Human migration is physical movement by humans from one area to another, sometimes over long distances or in large groups. .The movement of populations in modern times has continued under the form of both voluntary migration within one's region, country, or beyond, and involuntary migration (which includes the slave trade, Human traffic in human beings and ethnic cleansing). People who migrate are called migrants or more specifically, emigrants, immigrants, or settlers, depending on historical setting, circumstances and perspective.

The pressures of human migrations, whether as outright conquest or by slow cultural infiltration and resettlement, have affected the grand epochs in history and in land (for example, the Decline of the Roman Empire); under the form of colonization, migration has transformed the world (such as the prehistoric and historic settlements of Australia and the Americas). Population genetics studied in traditionally settled modern populations have opened a window into the historical patterns of migrations, a technique pioneered by Luigi Luca Cavalli-Sforza.

Forced migration has been a means of social control under authoritarian regimes yet free initiative migration is a powerful factor in social adjustment and the growth of urban populations.

In December 2003, The Global Commission on International Migration (GCIM) was launched with the support of Secretary-General of the United Nations Kofi Annan and several countries, with an independent 19-member Commission, a threefold mandate and a finite life-span ending December 2005. Its report, based on regional consultation meetings with stakeholders and scientific reports from leading international migration experts, was published and presented to Kofi Annan on 5 October 2005.

Different types of migration include: