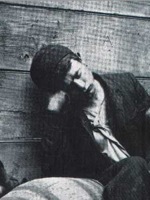 An orphan (from the Greek ὀρφανός) is a child permanently bereaved of his or her parents. In common usage, only a child (or the young of an animal) who has lost both parents is called an orphan. However, adults can also be referred to as orphans, or "adult orphans".

In certain animal species where the father typically abandons the mother and young at or prior to birth, the young will be called orphans when the mother dies regardless of the condition of the father.

Various groups use different definitions to identify orphans. One legal definition used in the United States is a minor bereft through "death or disappearance of, abandonment or desertion by, or separation or loss from, both parents".

In the common use, an orphan does not have any surviving parent to care for him or her. However, the United Nations Children's Fund (UNICEF), Joint United Nations Programme on HIV and AIDS (UNAIDS), and other groups label any child that has lost one parent as an orphan. In this approach, a maternal orphan is a child whose mother has died, a paternal orphan is a child whose father has died, and a double orphan has lost both parents. This contrasts with the older use of half-orphan to describe children that had lost only one parent.

Orphaned characters are extremely common as literary protagonists, especially in children's and fantasy literature. The lack of parents leaves the characters to pursue more interesting and adventurous lives, by freeing them from familial obligations and controls, and depriving them of more prosaic lives. It creates characters that are self-contained and introspective and who strive for affection. Orphans can metaphorically search for self-understanding through attempting to know their roots. Parents can also be allies and sources of aid for children, and removing the parents makes the character's difficulties more severe. Parents, furthermore, can be irrelevant to the theme a writer is trying to develop, and orphaning the character frees the writer from the necessity to depict such an irrelevant relationship; if one parent-child relationship is important, removing the other parent prevents complicating the necessary relationship. All these characteristics make orphans attractive characters for authors.[1]