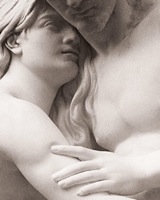 Pathos (pronounced /ˈpeɪθɒs/; Greek: πάθος, for 'suffering' or 'experience') represents an appeal to the audience's emotions. Pathos is a communication technique used most often in rhetoric (where it is considered one of the three modes of persuasion, alongside ethos and logos), and in literature, film and other narrative art. It is not to be confused with 'bathos' (βάθος), which is an attempt to perform in a serious, dramatic fashion that fails and ends up becoming comedy. Within literature and film, pathetic occurrences in a plot are not to be confused with tragic occurrences. In a tragedy, the character brings about his or her own demise, whereas those invoking pathos often occur to innocent characters, invoking unmerited grief.

Emotional appeal can be accomplished in a multitude of ways:

Pathos is often associated with emotional appeal. But a better equivalent might be appeal to the audience's sympathies and imagination. An appeal to pathos causes an audience not just to respond emotionally but to identify with the writer's point of view - to feel what the writer feels. In this sense, pathos evokes a meaning implicit in the verb 'to suffer' - to feel pain imaginatively. Perhaps the most common way of conveying a pathetic appeal is through narrative or story, which can turn the abstractions of logic into something palpable and present. The values, beliefs, and understandings of the writer are implicit in the story and conveyed imaginatively to the reader. Pathos thus refers to both the emotional and the imaginative impact of the message on an audience, the power with which the writer's message moves the audience to decision or action.

In the many works of Friedrich Schiller, "Sublime Pathos" (German, das Pathetisch-Erhabene) appears as a privileged aesthetic concept. According to Schiller, sublime pathos in the context of art demonstrates human freedom and triumph in the struggle against suffering. As such, pathos no longer refers to suffering itself, but rather an effect produced by overcoming suffering. Generally, Schiller links the experience of suffering to "grand ideas" - such as the idea of freedom; in this sense, pathos reminds one of Milton's Satan, when he cries out: "Hail, horrors, I greet thee!". Schiller's description of pathos continues to influence the use of the word today, in which such triumphant overcoming of suffering and other negative situations is seen as representing pathos. In modern cinema in particular, pathos can be found in many forms, such as in the film renditions of the Lord of the Rings directed by Peter Jackson.